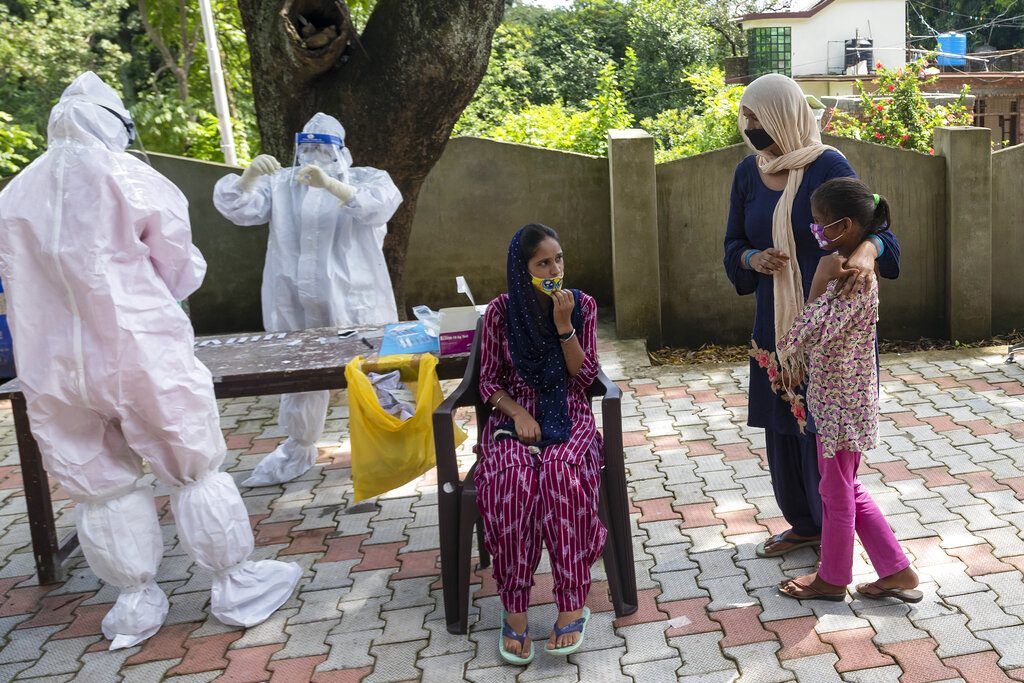 A woman and her daughter wait as their relative sits for a COVID-19 test at a rural health center in Bagli, outskirts of Dharmsala, India (AP Photo/Ashwini Bhatia)

India today (Tuesday) reported 1,133 deaths from the coronavirus in the last 24 hours, its highest single-day total.
The Health Ministry also reported 75,809 new cases, raising India’s tally to nearly 4.3 million — second only to the United States and maintaining an upward surge amid an ease in nationwide restrictions to help mitigate the economic pain. The country’s death toll now stands at 72,775.
India has been reporting the highest single-day caseload in the world for more than a month.
The rise in cases is partly due to increased testing. The number of daily tests conducted across the country has risen to more than a million. Nearly 3.3 million people in India have recovered from COVID-19 so far.
The pandemic has been economically devastating for India. Its economy contracted nearly 24% in the second quarter, the worst among the world’s top economies.
In other developments in the Asia-Pacific region:
— Indonesia says it has surpassed 200,000 confirmed coronavirus cases. The National Task Force for COVID-19 Mitigation reported 3,046 new infections on Tuesday, bringing the total to 200,035. It said 100 people had died in the past 24 hours, taking the death toll to 8,230. “We have to pay attention to our condition today as President Joko Widodo said we have to take care of health affairs first so the economic situation can get better,” task force spokesperson Wiku Adisasmito said. Indonesia confirmed its first cases in early March. The government imposed large-scale restrictions in April. Regional governments began lifting the restrictions and reopening business activities in June.
— Hong Kong officials said Tuesday that the city is in talks with 11 countries about setting up “travel bubbles” that would allow residents to travel internationally during the coronavirus pandemic. The countries include Australia, Japan, South Korea, Singapore, Malaysia and Germany. Some have closed their borders to tourists due to the outbreak, allowing only residents and citizens to enter. Such travel bubbles would include pre-flight coronavirus tests that would be recognized by both Hong Kong and the partnering country. Hong Kong’s minister for commerce and economic development, Edward Yau, said such travel bubbles depend on how ready and how comfortable both parties are with the situation and could change quickly. The consideration of travel bubbles comes as Hong Kong reported six new coronavirus cases on Tuesday, and coincides with the announcement of a further relaxation of the territory’s social distancing measures. From Friday, the limit on public gatherings will be increased to four people, up from just two. Most indoor and outdoor sports facilities as well as museums will be allowed to reopen. Coronavirus cases have declined in the city after a surge in locally transmitted infections in July. Hong Kong has reported a total of 4,896 infections, including 99 deaths.