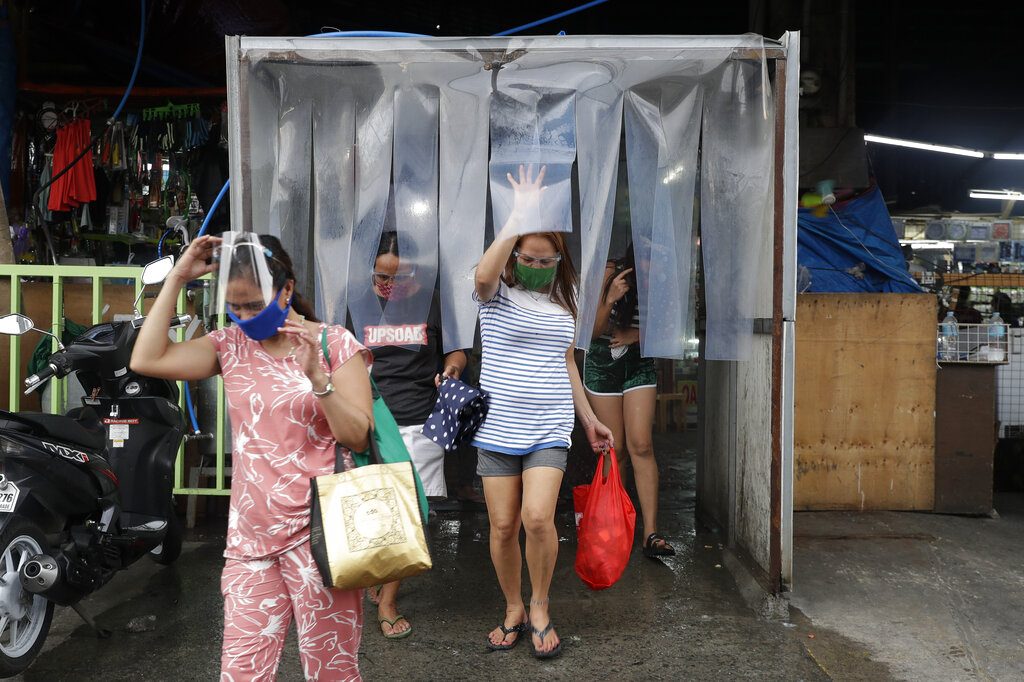 Women exit from a disinfecting area after buying food at a public market in preparation for stricter lockdown measures in Quezon city, Philippines (AP Photo/Aaron Favila)

MANILA — Commuter trains, buses and other public vehicles stayed off the main roads of the Philippine capital today (Tuesday) and police were again staffing checkpoints to restrict public travel as surging virus cases forced another lockdown.
Officials deployed dozens of shuttle buses, along with army trucks, to ferry stranded medical personnel and workers of authorized businesses. Most domestic flights to and from the capital were cancelled, and night curfews will return in places.
Crowds trooped to some supermarkets Monday to stock up on food after the hasty return to a lockdown sparked panic-buying.
The lockdown is milder than was first one imposed, which largely confined most people to their homes for months, but is more severe than the quarantine restrictions the capital had been under recently. It is being imposed in metropolitan Manila and outlying provinces for two weeks.
Businesses previously allowed to partly reopen, including barbershops, gyms, dine-in restaurants and tourist destinations, will again be closed. Authorized companies including banks, health and food processing firms must shuttle their employees between home and work. Travelling by bike, motorcycle and private car is allowed for essential reasons, but mass transit will be closed.
President Rodrigo Duterte agreed to reinstate the lockdown after medical groups warned the health care system was being overwhelmed by COVID-19 patients. More than 106,000 people have been infected, including more than 2,100 who have died.
In other developments in Asia and the Pacific:
— India’s daily increase in infections topped 50,000 for a seventh straight day. Tuesday’s spike of 52,050 cases recorded in the past 24 hours took the national total to 1,855,745, according to the Health Ministry database. The ministry also reported 803 new deaths, taking total fatalities up to 38,938. Several political leaders have either tested positive for the coronavirus or gone into quarantine over the last few days. Since Sunday, India’s powerful home minister Amit Shah and the chiefs of two big states have been hospitalized with COVID-19. On Monday, Tripura state’s chief minister, Biplab Deb, and India’s Law and Justice Minister, Ravi Shankar Prasad, also went into isolation.
— Two more patients have died in Vietnam’s outbreak, with an additional 10 people infected. The man and woman who died Tuesday were in their 60s and had kidney disease, the health ministry said. All eight of Vietnam’s deaths from COVID-19 were connected to a Da Nang hospital where another dozen patients remain in critical condition. The ministry said the 10 new cases were traced to the hospital cluster. Da Nang has mobilized the army to disinfect hot spots in the city. An army laboratory truck has also been deployed to increase testing capacity. Ho Chi Minh city will resume requiring face masks to be worn in public on Wednesday after closing bars and canceling public events last week.
— Australia’s hard-hit State of Victoria banned people who should be self-isolating from exercising outside their homes and introduced tougher fines for infected people who continue to go to work. Victorian Premier Daniel Andrews said self-isolation was hard to enforce if people used a lawful excuse to justify other decisions. Military and health teams who knocked on the doors of 3,000 homes recently could not find 800 people who should have been there because they had the virus or were awaiting a test result. The government has also increased the fine for failing to self-isolate from 1,652 Australian dollars ($1,169) to AU$4,957 ($3,507). The most serious cases could also be taken to court and fined up to AU$20,000 ($14,151), Andrews said. Victoria reported 439 new cases overnight and 11 new deaths.
— Both mainland China and Hong Kong reported fewer new cases of COVID-19 on Tuesday as strict measures to contain new infections appear to be taking effect. Mainland China announced 36 new cases across the country, down from 43 the previous day. Of those, 28 were in the northwestern region of Xinjiang and two in Liaoning province in the northeast. Another six cases were brought by Chinese arriving from overseas. Hong Kong reported 78 new cases, the first time in almost two weeks that new cases had fallen into double-digits. Authorities ordered mask wearing in public places, restrictions on indoor dining and increased testing to contain the city’s outbreak.