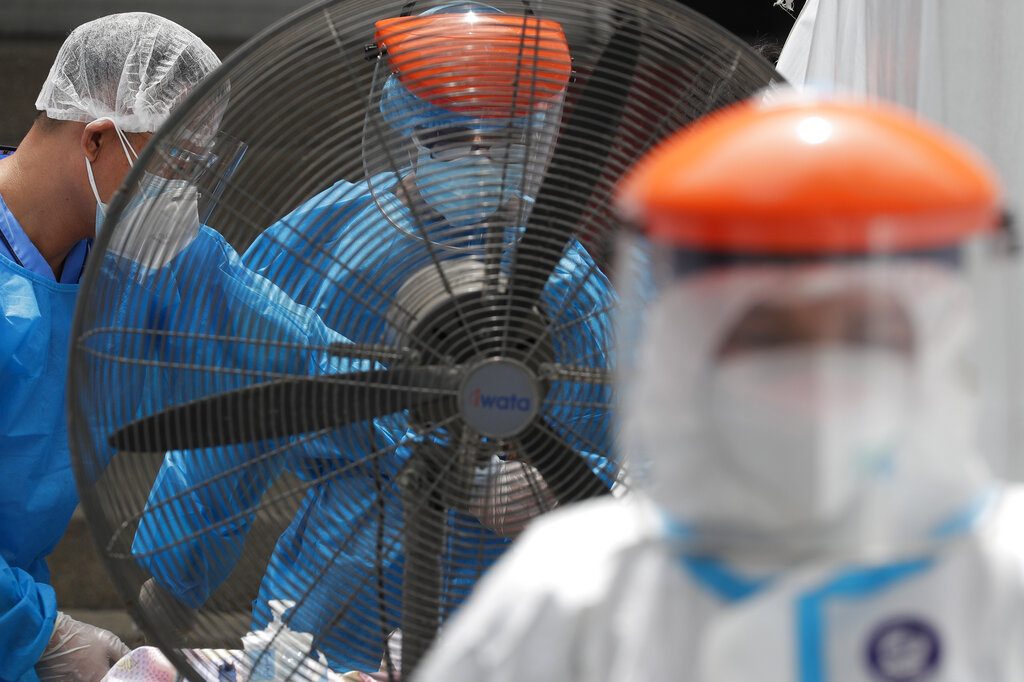 Health workers perform a rapid test on a patient at a parking lot that has been converted into an extension of the Gat Andres Bonifacio Memorial Medical Center in Manila, Philippines on Monday (AP Photo/Aaron Favila)

CANBERRA — The State of Victoria, Australia’s coronavirus hot spot, announced today (Monday) that businesses will be closed and scaled down in a bid to curb the spread of the virus.
Victoria Premier Daniel Andrews said nonessential businesses will close starting late Wednesday in Melbourne, Australia’s second-largest city.
The new restrictions followed Andrews on Sunday declaring a disaster in Melbourne and introducing an evening curfew for six weeks. Andrews predicted the latest restrictions would cost 250,000 jobs.
Victoria announced on Monday 429 new infections and 13 more deaths overnight. Chief Health Officer Brett Sutton said the infection rate would continue at 400 or 500 new COVID-19 cases a day without the new restrictions.
Industries that will have to close on-site operations for six weeks include most retail and manufacturing.
Australian Prime Minister Scott Morrison said Monday that workers in Victoria state will be entitled to a 1,500 Australian dollar ($1,060) payment if they are required to self-isolate for 14 days and they don’t have paid sick leave.
In other developments in the Asia-Pacific region:
— Philippine President Rodrigo Duterte is reimposing a moderate lockdown in the capital and outlying provinces after medical groups appealed for the move as coronavirus infections surge. Presidential spokesman Harry Roque said Monday that metropolitan Manila, the capital region of more than 12 million people, and five densely populated provinces will revert to stricter quarantine restrictions for two weeks starting Tuesday. Mass public transport will be barred and only essential travel will be allowed. Leaders of nearly 100 medical organizations held an online news conference Saturday and warned that the health system has been overwhelmed by infection spikes and may collapse as health workers fall ill or resign from exhaustion and fear. The number of COVID-19 cases in the Philippines surged past 103,000 on Sunday and is second-most in Southeast Asia.
— Indian health authorities have given approval to the Serum Institute of India for conducting phase two and three trials of a COVID-19 vaccine candidate developed by the University of Oxford. The approval came late Sunday from the Drugs Controller General of India. At least 1,600 adults will participate in the trials. Serum, the world’s largest maker of vaccines by volume, is mass-producing the vaccine candidate developed by the University of Oxford. It’s one of several candidates being developed. Meanwhile, India’s coronavirus caseload Monday crossed 1.8 million with another spike of 52,972 new cases in the past 24 hours. The Health Ministry on Monday also reported 771 deaths in the past 24 hours, taking total fatalities up to 38,135.
— An outbreak in China’s far northwestern region of Xinjiang is continuing to subside, with 28 new cases reported Monday. The outbreak of 590 cases so far has been concentrated in the capital, Urumqi, where authorities have conducted mass testing, cut public transport, isolated some communities and restricted travel. Yet, while mainland China’s latest outbreak appears to have peaked, authorities in the semi-autonomous Chinese city of Hong Kong are struggling to contain infections, with more than 200 added over the weekend.
— South Korea has confirmed 23 additional cases of the coronavirus, amid a downward trend in the number of locally infected patients. The additional cases announced Monday by the Korea Centers for Disease Control and Prevention took the country’s total to 14,389 with 301 deaths. The agency says 20 new cases came from overseas while the rest were locally infected. Health authorities have said imported cases are less threatening to the wider community as they enforce two-week quarantines on all people arriving from abroad.
MDT/AP