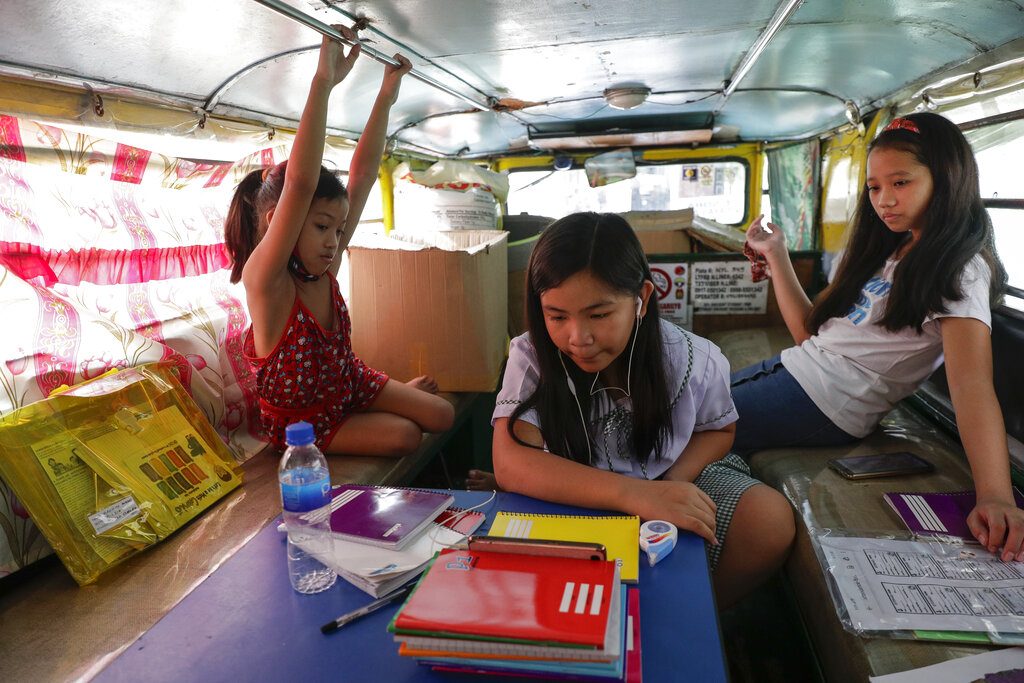 Grade school and high school students in the Philippines began classes at home today (Monday) after the coronavirus pandemic forced remote-learning onto an educational system already struggling to fund schools.
The shift to distance learning has been a logistical nightmare for the poverty-stricken Southeast Asian country that has long lacked enough classrooms, teachers and educational equipment. Nearly 25 million students enrolled this year, mostly in 47,000 public schools nationwide that would have to be replicated in homes and enlist the help of parents and guardians as co-teachers.
A majority of families, especially from poor and rural communities, opted to use government-provided digital or printed learning materials or “modules,” which students will read at home with the guidance of their elders before carrying out specified activities. Most lack computers and reliable internet connections. Teachers can answer questions by telephone.
Other families preferred for their children to get lessons online or through regional radio and TV educational broadcasts.
“The system may not be perfect and there may be issues as we shift to flexible learning … but we are confident that the Department of Education would address these challenges,” presidential spokesman Harry Roque said.
The students have been out of school since classes were suspended in mid-March.
President Rodrigo Duterte has said classes should resume only when a COVID-19 vaccine has been made available, fearing classrooms could become infection hotspots.
The Philippines has reported more than 322,400 infections, the highest in Southeast Asia, with more than 5,700 deaths.
In other developments in the Asia-Pacific region:
— Chinese tourists took 425 million domestic trips in the first half of the eight-day National Day holiday, generating $45.9 billion in tourism revenue, according to China’s ministry of culture and tourism. The holiday this year, which coincides with the Mid-Autumn Festival, will be a litmus test of whether China’s tourism industry can bounce back after being battered by COVID-19. Now, local governments across China are offering travel subsidies to domestic tourists, and over 1,000 tourist attractions are offering free admission or discounted tickets to visitors. The travel rush comes after China has reported no new locally transmitted coronavirus infections since mid-August.
— Sri Lankan authorities closed a university and imposed restrictions on buses and trains on Monday, a day after a COVID-19 patient was reported from the community for the first time in two months. A curfew was imposed Sunday in the Colombo suburbs where the patient lived, and about 15 hospital staff and 40 co-workers have been quarantined. The state-run University of Kelaniya in the area was also closed down for a week starting from Monday. Buses and trains must transport passengers according to the number of seats, and commuters must wear masks. Schools countrywide have been closed down. For more than two months, health officials have been saying that they have prevented the community spread of the virus. The country has reported 3,388 confirmed cases, including 13 deaths. Of the total, 3,254 have recovered.
— India registered 74,442 new coronavirus cases, driving the country’s tally to 6.6 million. The Health Ministry on Monday also reported 903 deaths in the past 24 hours, taking total fatalities to 102,685. India, the second worst-affected nation in the world after the United States, is witnessing a sustained decline in new coronavirus infections and active virus cases have remained below the million mark for 14 consecutive days. It still is registering the highest number of daily cases globally and is soon expected to cross the U.S. which has 7.4 million confirmed coronavirus cases.
— South Korea reported 73 new cases of the coronavirus, although officials worry of a potential rise after the five-day holiday period that ended Sunday. Health Minister Park Neung-hoo during a virus briefing Monday urged people who experience fever or other symptoms after traveling during the holiday to get tested immediately. A recent decline in new infections may be related to fewer tests being conducted during the Chuseok harvest holiday. The updated figures by the Korea Disease Control and Prevention Agency brought the caseload to 24,164, including 422 deaths. The newest cluster in the capital region is an army unit in Pocheon, where more than 30 troops have tested positive.