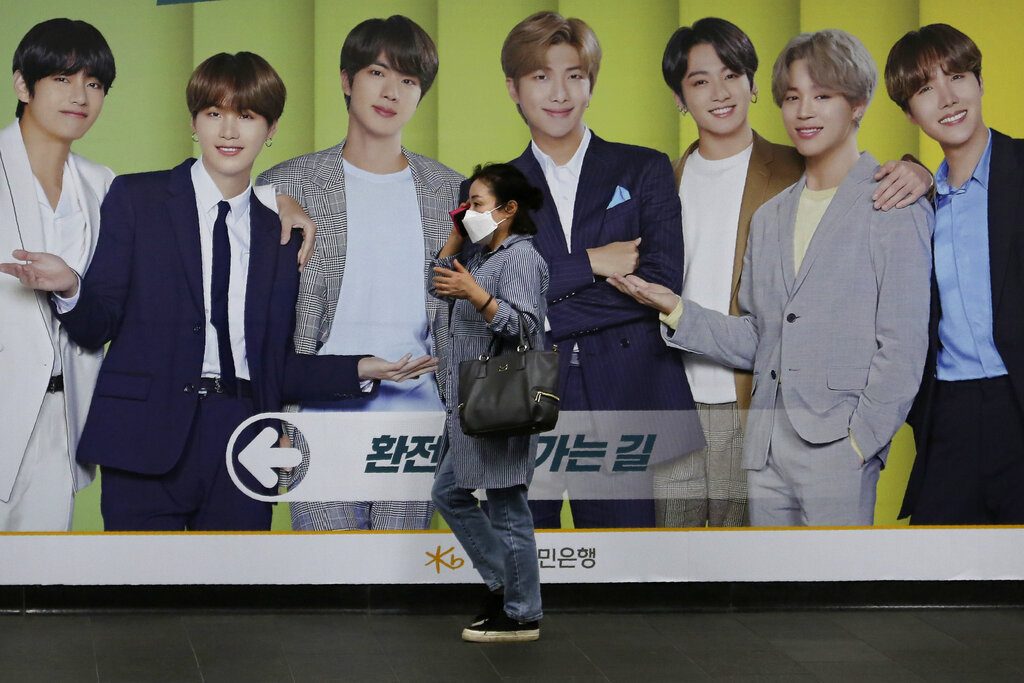 A woman wearing a face mask to help protect against the spread of the coronavirus walks by a board showing members of South Korean K-Pop group BTS to advertise a local bank’s money exchange in Seoul, South Korea (AP Photo/Ahn Young-joon)

South Korea has reported 113 new cases of COVID-19, its first daily increase over 100 in five days, as the country entered a holiday break that officials fear would possibly worsen transmissions.
The numbers released by the Korea Disease Control and Prevention Agency today (Wednesday) brought the caseload to 23,812, including 413 deaths.
Eighty-one of the new cases came from the Seoul metropolitan area, where health workers have struggled to stem transmissions linked to various sources, including churches, medical facilities, restaurants, schools and workers. The newest cluster of infections is a mental hospital in northern Seoul where at least 30 have been infected.
Twenty of the new cases were tied to international arrivals.
Officials have called for citizen vigilance ahead of the Chuseok harvest festival that began Wednesday and continues through the weekend.
While millions of South Koreans travel during Chuseok every year to visit relatives, officials have pleaded that people stay home to help stem transmissions. Nightclubs, bars, buffet restaurants and other establishments deemed as “high-risk” will be shut in Seoul during the holiday period to reduce gatherings.
In other developments in the Asia-Pacific region:
— North Korea called on governments to “display effective leadership” in the fight against COVID-19 and said its own measures against the pandemic ensured it had the threat “under safe and stable control.” Kim Song, the country’s U.N. ambassador, said a tightly administered anti-pandemic effort in his nation had been working. North Korea strictly regulates foreign visitors and filters all information through its state propaganda apparatus, with details about its approach to the coronavirus relatively scant. “A series of state measures are now being taken to block the virus inflow into the country, and all people adhere strictly to anti-epidemic regulations while maintaining the highest alert,” he said. Separately, state media reported the nation’s leader Kim Jong Un had presided over a Politburo meeting where officials warned against complacency and addressed unspecified problems in the anti-virus campaign.
— India recorded 80,472 new confirmed coronaviruses cases in the past 24 hours, showing a decline from a record high two weeks ago. The Health Ministry raised India’s confirmed total to more than 6.2 million on Wednesday with 2.5 million in September alone. It also reported 1,179 fatalities in the last 24 hours, raising the death toll to 97,497. India’s Vice President M. Venkaiah Naidu tested positive on Tuesday and was advised home quarantine. His office said in a tweet that Naidu, 71, is asymptomatic and in good health. Home Minister Amit Shah had tested positive last month and recovered in a hospital. India’s recovery rate crossed 83% on Tuesday and the number of cases under treatment were less than 1 million. The daily testing covered more than 1 million people, the ministry said. Meanwhile, a serological survey showed that the infections were more prevalent in urban centers with high population density. The survey by the state-run Indian Council of Medical Research also found that 6.6% of the population above 10 years old have been exposed to the coronavirus.
— Preparations have begun for Thailand to receive its first group of foreign tourists since scheduled commercial passenger flights into the country were halted in April due to the coronavirus pandemic. Phuket Gov. Narong Woonsiew on Wednesday inspected the international airport at the popular southern resort island, where a new system including coronavirus checkup equipment and transport facilities has been installed to welcome the visitors. The first tourists will be 150 Chinese from Guangzhou province who will arrive on Oct. 8, Minister of Tourism and Sports Phiphat Ratchakitprakarn said Tuesday. He said at least three groups of foreign tourists will arrive in October — two from China and one from Scandinavia. All will be subject to restrictions on their movements. The plan needs final approval from the Cabinet. There has been speculation that the Oct. 8 start may be delayed, but Narong told reporters Phuket is ready. “We have to assure hygiene for local residents, but at the same time we have to revive our economy. We should do that without triggering a second round of the outbreak,” he said. Thailand has had 3,564 coronavirus cases, including 59 deaths.