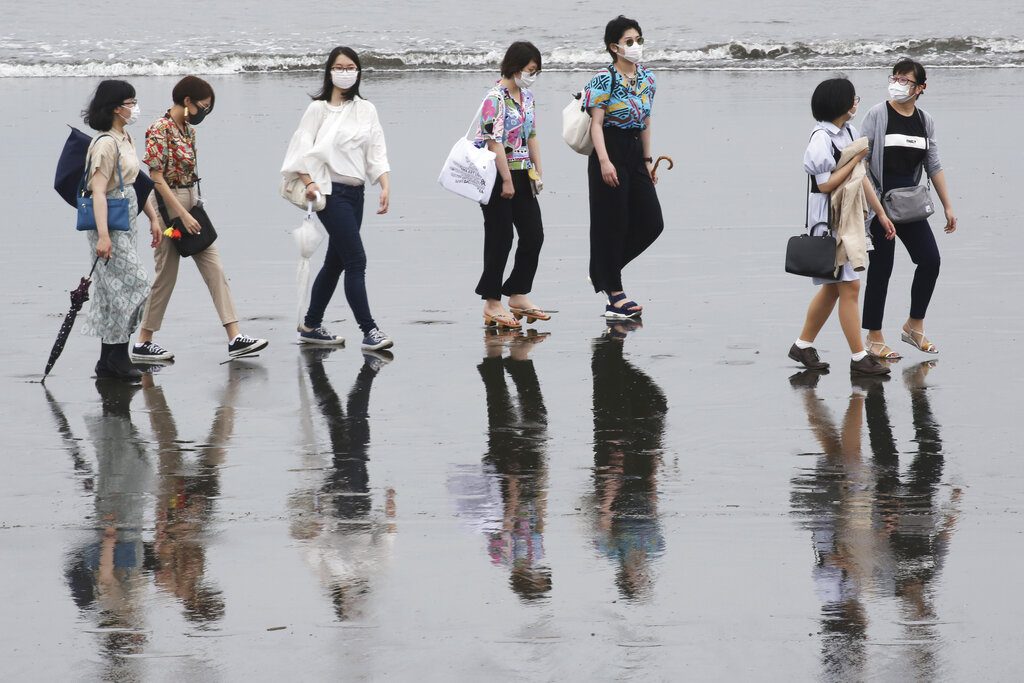 People wearing face masks to protect against the spread of the new coronavirus walk on a beach on a national holiday in Fujisawa, Kanagawa prefecture, near Tokyo, Thursday (AP Photo/Koji Sasahara)

TOKYO — The city of Tokyo announced a record 366 new daily coronavirus cases on Thursday, exceeding 300 for the first time as Japan begins a four-day weekend with many people joining a tourism promotion campaign that the government is pushing despite concerns of a new wave of infections nationwide.
The number of daily cases in Tokyo had fallen to just several in late May after the government ended a national state of emergency but have climbed steadily since late June, with the number tripling in the first three weeks of July. Tokyo now has 10,420 confirmed cases, including 327 deaths.
“Please be mindful of your actions and do your utmost not to get infected, and not to infect others,” Tokyo Gov. Yuriko Koike said Thursday.
Koike on Wednesday asked residents to stay home as much as possible during the long weekend, even though Prime Minister Shinzo Abe’s government has gone ahead with a “Go To” tourism promotion campaign that excludes Tokyo for now to help the badly hit tourism industry.
Until recently, officials have said most cases were limited to younger people linked to nightlife entertainment districts, but experts at a Tokyo task force meeting on Wednesday said infections have spread to older people and to regular homes, workplaces and restaurants.
Tokyo hospitals are also on the brink of running out of space. The city, which earlier allocated 1,000 beds for coronavirus patients, has asked hospitals to secure up to 2,800 beds, but preparations are taking time and beds are filling up quickly. Koike said the city is also in the process of securing hotel rooms for less sick patients.
Three prefectures neighboring Tokyo — Kanagawa, Saitama and Chiba — also recorded record daily cases on Wednesday for a combined total of 170. Osaka also had a daily record of 121.
Nationwide, Japan had 775 new confirmed cases Wednesday, the largest daily increase since 720 on April 11 during an earlier peak, for a national total of 27,029 cases.
In other developments in the Asia-Pacific region:
— India added 1,129 deaths to its coronavirus toll after including a southern state’s unreported fatalities. India has the seventh-most confirmed deaths in the world with 29,861. Health experts have warned that India likely has more deaths than reported because some states used varying criteria to categorize deaths. Thursday’s increase includes 444 previously unreported fatalities in Tamil Nadu, as well as 685 deaths nationwide reported in the last 24 hours. The Health Ministry also reported a record 45,720 new cases, taking total confirmed infections to 1,238,635. Many states are reimposing or considering lockdowns. Late Wednesday, Kashmir announced a complete five-day lockdown in areas where infections are spiking. A two-day complete lockdown also started Thursday in the eastern state of West Bengal.
— Wearing masks became compulsory in Australia’s second-largest city, Melbourne, as hot spot Victoria state posted 403 new cases and five deaths. Much of the spread is blamed on sick workers who do not take time off from their jobs while they wait for coronavirus test results. The wait for those results has usually been two days. The state government announced Thursday that workers who do not have sick leave will be eligible for a one-time support payment of 300 Australian dollars ($213) while they await test results.
— Hong Kong’s daily coronavirus cases hit a record high of 118 on Thursday in a renewed wave of infections that has hit the city since the beginning of the month. Of the new infections, 111 were locally transmitted, of which authorities unable to trace the source of 51. Hong Kong now has a total of 2,250 confirmed infections, including 14 deaths. To combat the spread in the community, the Hong Kong government has made masks compulsory on public transport and in public indoor areas. Health officials have urged people to stay home as much as possible, especially the elderly and those with underlying conditions. Social distancing measures have also been tightened, with gatherings of more than four people banned. Gyms and amusement parks are shuttered, and restaurants can only operate at limited capacity.
— California will spend another $315 million on protective masks through a contract with a Chinese manufacturer. Gov. Gavin Newsom announced the deal with BYD as he touted California’s efforts to procure masks for health care and other essential workers. Newsom signed a $1 billion contract with BYD in April and the first masks began arriving last month after delays. Newsom said California will try to get more masks at lower prices through competitive bidding. But he acknowledged the masks aren’t always getting to workers who need them.

— Malaysia will make wearing masks mandatory in crowded public areas and on public transportation from August to prevent flareups in coronavirus infections. Defense Minister Ismail Sabri Yaakob said Thursday that those who fail to comply will face fines of 1,000 ringgit ($235). He said virus cases appear to be creeping higher, with many people and businesses lax in observing social distancing and health safety measures. Daily infections have risen to double digits since Malaysia reopened its economy last month after weeks of lockdown. Most restrictions have been removed, but nightclubs and karaoke clubs remain shut and mass gatherings are still banned. Malaysia has reported 8,840 cases, including 123 deaths.