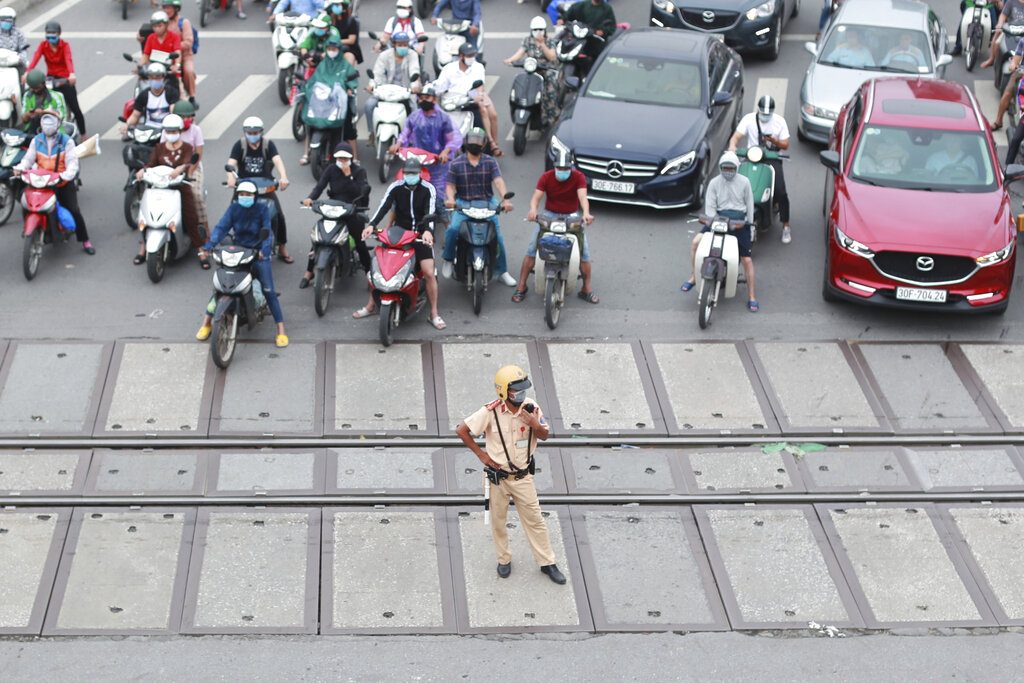 A policeman manages the traffic in Hanoi, Vietnam on Wednesday (AP Photo/Hau Dinh)

Vietnam will resume international commercial flights to several Asian destinations starting Friday, after a monthslong shutdown to curb the coronavirus outbreak.
The flights, however, are reserved for Vietnamese nationals, diplomats, experts, managers, skilled workers, investors and their families. They are not yet available for tourists.
According to a report on the government website, flights connecting Vietnam’s two largest cities — Hanoi and Ho Chi Minh City — to destinations in South Korea, Japan, China and Taiwan will operate on a weekly basis. Flights connecting the cities with Cambodia and Laos will resume next week.
To board a flight, passengers must hold a certificate showing they have tested negative for the coronavirus no more than five days before the departure date. Upon arrival, they will be tested and placed under quarantine, the report said.
Vietnam shut down international flights on April 1. National carrier Vietnam Airlines estimated last month that it would lose $650 million in 2020.
Vietnam has reported 1,059 cases of the coronavirus. It managed to avoid any deaths until July, when the virus crept into the city of Da Nang, killing 35 people.
But no new cases have been reported for two weeks. Last week, Da Nang lifted a travel restriction after two months.
Elsewhere in the Asia-Pacific region:
— India’s coronavirus confirmed cases crossed 5 million on Wednesday, still soaring and testing the country’s feeble health care system in tens of thousands of impoverished towns and villages. The Health Ministry reported 90,123 new cases in the past 24 hours, raising the nation’s confirmed total to 5,020,359, about 0.35% of its nearly 1.4 billion population. It said 1,290 more people died in the past 24 hours, for a total of 82,066. India’s total coronavirus caseload is closing in on the United States’ highest tally of more than 6.6 million cases and expected to surpass it within weeks. India reported a record daily high of 97,570 cases on Sept. 11 and has added more than 1 million cases this month alone.
— South Korea’s daily coronavirus tally has stayed below 200 for two weeks, but the government is urging people not to lower their guard. Authorities said Wednesday that the 113 cases added in the last 24 hours took the country’s total to 22,504, including 367 deaths. Eighty-one of them were in the Seoul metropolitan area, the heart of a recent viral resurgence in South Korea. Vice Health Minister Kim Gang-lip called on people to refrain from having unnecessary gatherings and visiting crowded places.