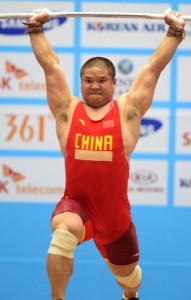 China widened its lead in the Asian Games medal race yesterday as the competition was overshadowed by the Qatari women’s basketball team withdrawing because of a ban against wearing Muslim headscarves during games.
Three world records were also set in archery, shooting and weightlifting
At the end of day six of the 16-day continental games, with 173 of the 439 total gold medals awarded, China had won 78 golds, with South Korea and Japan in a tie for second with 28 each.
The dispute over the Qatari players’ refusal to remove their hijabs — considered by conservative Muslim women to be a requirement of their faith — has raised new questions about rules over head coverings and efforts to promote Muslim women’s sports participation. Qatar delegation leader Khalid al-Jabir said the team had decided to withdraw and was already preparing to return home.
The Qatari women were due to play Nepal yesterday afternoon but didn’t show up at the venue. The women weren’t allowed to wear head coverings in their opening game on Wednesday and refused to play, surrendering the game to Mongolia.
Although sports ranging from bowling to badminton allow hijabs to be worn during the Asian Games, basketball’s world governing body does not allow them in international competition.
Away from the controversy, attention again focused on the swimming competition, with rivals Japan and China splitting the medals over the day’s six races. With one day to go, China holds the overall lead with 18 swimming golds to Japan’s 11.
China’s Shi Yang won the men’s 50-meter butterfly in 23.46 seconds, with 100 butterfly gold medalist Joseph Schooling coming in second to earn his third medal of the competition. Yang Jung-doo of South Korea was third.
Japan’s Olympic silver medalist Satomi Suzuki outpaced the favorites to win the women’s 50 breaststroke in 31.34 ahead of China’s Suo Ran and He Yuzhe.
Meanwhile, hometown favorite Park Tae-hwan continued his mediocre run at the games with a silver in the men’s 100 freestyle behind China’s Ning Zetao, who set a new Asian record at 47.70 seconds. Japan’s Shinri Shioura was third.
China’s Bi Yirong won the women’s 800 freestyle by more than six seconds to finish in 8:27.54, ahead of teammate Xu Danlu and Japan’s Asami Chida.
Japan’s Ryosuke Irie overcame a strong challenge from China’s Xu Jiayu to win the men’s 200 backstroke. Third place went to teammate Hagino Kosuke, who has won medals in all seven races he’s entered, including four golds.
Japan triumphed also in the women’s 4×100 medley relay in a time of 4:00.94, with South Korea taking silver and Hong Kong bronze. China had been disqualified in the heats after Lu Ying swam underwater past the 15-meter limit.
In other sports, South Korea’s women’s archery team scored a record 238 out of a possible 240 points in the compound 24 arrows match yesterday, while China’s men’s team notched a new mark of 1,876 points in the 50-meter rifle prone event. North Korea’s Kim Un Ju set a new record in the women’s weightlifting 75 kilogram class with a clean and jerk of 164 kilograms.
A total of 11 new world marks have been set at these games, eight of them in weightlifting.
Two-time Olympic gold medalist Lin Dan of China launched his campaign for a third straight Asian Games badminton men’s singles title with a straight-sets win over South Korea’s Lee Dong-keun.
In field hockey, defending champion Pakistan downed archrival India 2-1 in their preliminary match. The two dominate the Asian Games hockey competition, with Pakistan having the edge at eight golds.
China and Japan split gold in fencing, with China winning the women’s team epee event, and Japan the men’s team foil.
In gymnastics, Hong Kong’s Shek Wai Hung won the men’s vault, North Korea’s Kim Un Hyung the balance beam, China’s Yao Jinnan the women’s floor exercise, and Japan’s Yuya Kamato the parallel bars. Christopher Bodeen, Incheon, AP