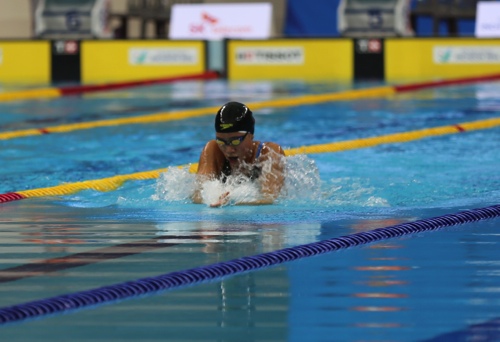 Macau’s female swimmers were able to reach the final rounds of two swimming categories in the Asian Games.
Lei On Kei was competing in the women’s 50 meters yesterday morning when she achieved a time of 32.83 seconds. It was 0.25 seconds more than her Macau record, securing her the chance to compete into the final eight. She finished last in the final in 32.71 seconds.
Another category in which Macau’s swimmers triumphed was the 4×100 meter medley relay. Erica Vong Man Wai, Lei On Kei, Ma Cheok Mei and Tan Chi Yan entered the next stage of the competition after achieving a time of 4 minutes 28 seconds 43. They ranked seventh in the final, again with an improved time of 4 minutes 26 seconds 18.
Their male teammate Ngou Pok Man was able to break the Macau record in the men’s 100 meter freestyle with the time of 51.91 seconds. However, he was unable to make it into the final.
The Macau swimming team coach Ying Jingli has previously told the Times that their goal was for the athletes to attempt to gain entry into the final eight.
Meanwhile, the Macau female triathlete Hoi Long ranked fifth in the triathlon category.
She was competing with 14 other triathletes and came in second place after finishing the 1.5 kilometers swimming and 40 kilometers cycling components. In the 10 kilometers running stage, Hoi Long crossed the finishing line almost at the same time as two Chinese national team triathletes and eventually ranked fifth.
Two Japanese and one Chinese triathlete occupied the first three places.
Macau’s fencing team will depart from South Korea today and head home while the diving team will arrive at lunchtime. JPL