Ask the Vet | Causes of seizures in cats 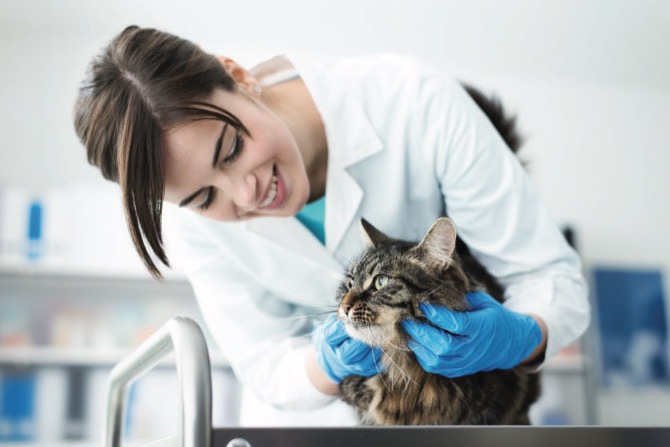 Seizures in cats are a common neurological disorder. If a cat has a seizure, prompt medical attention should be sought, as this could be a sign of a more serious disorder.

A seizure is when neurons in the brain fire incorrectly and excessively, independently of each other. As a result, the muscles in a cat will begin to contract without his or her control. A seizure has three phases: the Aura period, Ictus period, and the Posticial period.

The Aura period is the time right before the seizure happens. A cat may show signs that he or she is about to have convulsions by acting unusual, nervous, salivating, etc. The behavior a cat has during this time is different for every feline.

In the Ictus period, the cat will lose control of his or her muscles and fall down. The muscles will begin to contract involuntarily and strongly. A cat may look like it is paralyzed and shaking at the same time. The cat may lose control of bodily functions and begin to salivate.

The Posticial period is right after the seizure. A cat will be disoriented and may be unresponsive at first. The cat may then begin to pace or seek his or her owner for comfort. Every cat is different in this period.

Causes of Seizures in Cats

Epilepsy is a common cause of seizures in cats. This is a chronic disease that is incurable, but controllable.

Toxoplasmosis has been known to cause seizures in cats. This is caused by a parasite, which can cause an infection that can damage a cat’s central nervous system.

The feline immunodeficiency virus (FIV) depresses a cat’s immune system. As a result, it is harder for a cat to fight bacteria or viruses which a healthy cat could fend off easily. The viruses or bacteria a cat with FIV could contract may cause seizures. A cat with FIV can also begin to have seizures because of the virus itself, which weakens a cat over time.

Feline Infectious Peritonitis (FIP) is a viral disease that affects younger and older cats. This serious disease can attack specific parts of a cat’s body. If the virus attacks a cat’s brain, for example, a seizure may present itself as a symptom.

Like FIV, the feline leukemia virus (FeLV) affects a cat’s immune system. FeLV can cause secondary infections or even cancer in a cat. One of the symptoms of this virus is a neurological disorder, like seizures.

Seizures in cats can often be treated with the aid of a veterinarian. If your cat has a seizure, take him or her to the vet, learn about the cause of the episode and follow up on care.

Municipal bureau has no plan to change identical street names