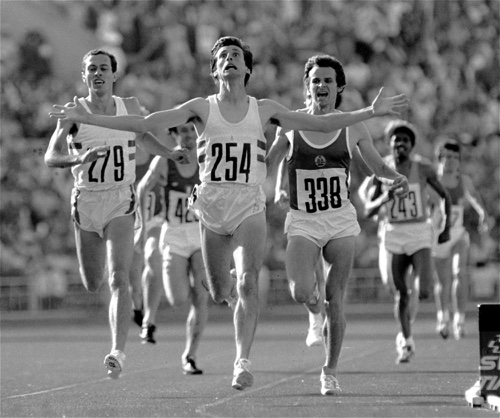 Outlining his vision for the future of track and field, Sebastian Coe called yesterday for an overhaul of the sport’s “disjointed” competition calendar and for the creation of a global street race circuit.
Coe, who declared his candidacy last week for president of the International Association of Athletics Federations, presented his campaign manifesto in London.
The former two-time Olympic 1,500-meter champion said the sport’s schedule needs to be revamped to make it easier for the public to understand.
“To many within and outside our sport, the world athletics calendar seems disjointed, lacks purpose, a narrative and the essential glue to build excitement and a loyal and passionate following,” Coe said. “Many fans don’t know when the athletics season starts, when it ends, why it seems to bounce around from the USA to Europe to Asia and back again. It is confusing to spectators and viewers alike.”
Coe also called for the introduction of an “IAAF Street Athletics” circuit in major cities around the world to attract new fans.
“We can build on this through a new IAAF overseas series of events piggybacking some of the more established current one-day meetings in centers or population,” he said.
Pole vault great Sergei Bubka of Ukraine is also expected to run for IAAF president to succeed Lamine Diack, who steps down next August after holding office since 1999.
Coe said the IAAF must show greater “financial transparency” regarding the amount of appearance money and prize money that top athletes receive at one-day meetings.
“The truth is that, as a sport, we do not openly speak about the significant sums that are paid in appearance money,” he said.
With the doping issue at the forefront again after a series of positive tests in Kenya, Coe said the IAAF should explore creating an independent tribunal to handle doping violations committed in international competitions.
The 58-year-old Coe is currently an IAAF vice president. He won gold medals at the 1980 and 1984 Olympics and set 12 world records during his career in the 800 meters, 1,500 and mile. Rob Harris, London , AP