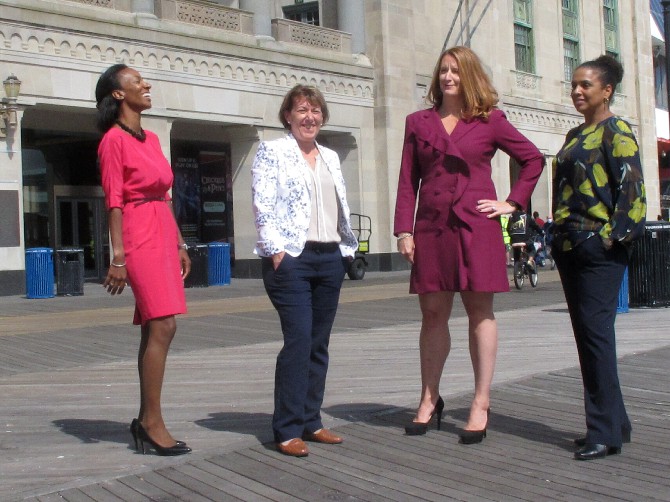 For decades, women have dealt cards or served drinks in casinos, but they rarely got the chance to run the joint.
But women now run four of Atlantic City’s nine casinos in what some industry executives and observers say could be the future of the gambling industry.
Caesars Entertainment hired Jacqueline Grace last week to run the Tropicana casino as its senior vice president and general manager. She is one of two Black women in charge of casinos in Atlantic City, joining Melonie Johnson, who took over leadership of the Borgata this year as its president.
The other women at the helm of Atlantic City casinos are Terry Glebocki, CEO of the Ocean Casino Resort, and Karie Hall, senior vice president and general manager of Bally’s.
“I hope I live to see the day where this is not considered news,” Johnson said. “I think the world is starting to catch up, but it’s probably going to be another 10 years before we get all the inequity out of the workforce.”
The American Gaming Association, the national trade group for the casino industry, does not keep statistics on the number of U.S. casinos run by women, but numerous casino executives and analysts said they were hard-pressed to think of another market with a higher percentage of female-led casinos.
All agreed it is far less than the number of men who hold those jobs, with several placing it at about 10%.
“I think it speaks to the rapid changes in the gaming industry, which was traditionally very male-oriented, over the past few years,” said David Schwartz, a gambling historian with the University of Nevada, Las Vegas. “Many of the reasons for the male domination had to do with the way casinos were run in Nevada. Women didn’t deal in Las Vegas until the 1970s, giving them far fewer chances.”
Debra Nutton was one of the first craps dealers in Las Vegas, which so irked one of her male bosses at the Sands that he referred to her in front of others as “that (expletive) broad.” She persevered and soon was promoted to manager of the dice pit, where a female boss was unheard of at the time.
“The more women that get a seat at the table and prove their value, the better it is for the second, third and fourth person in the line,” said Nutton, who eventually became a senior vice president at the Wynn and MGM casino companies before retiring. “When women have a seat at the table and can say of a candidate: ‘I know her, she’s fantastic!’ the more opportunities we will get.”
When New Jersey began legal casino gambling in 1978, it opened up a new world of possibilities for women, said Virginia McDowell, vice president of Global Gaming Women, which advocates for women in the gambling industry. Many who worked their way up from dealers into supervisory roles went on to higher-level careers elsewhere in the country as gambling spread.
“I can think of at least a dozen women trained in Atlantic City who went on to lead very significant careers in the industry, people who held the highest positions across the U.S.,” said McDowell, who served as executive vice president of the Trump casinos in Atlantic City, and CEO of Missouri-based Isle of Capri casinos.
Six years ago, six of Iowa’s 19 casinos were led by women, a figure that has since declined to five, according to Wes Ehrecke, president of the Iowa Gaming Association.
“I don’t think it’s a coincidence” that nearly half of Atlantic City’s casinos are run by women, said the Atlantic City Tropicana’s Grace, who spent 10 years in finance before entering the gambling industry. “I think it’s corporations being thoughtful about a workforce that looks like their communities.”
Hall, the Bally’s general manager in Atlantic City, said, “One of the things I’m really passionate about is what comes behind us — what that pipeline looks like, so that this is not just an aberration, that it’s not just us.
“This is a progression,” she said. “We want to keep it moving forward.” WAYNE PARRY, ATLANTIC CITY, AP