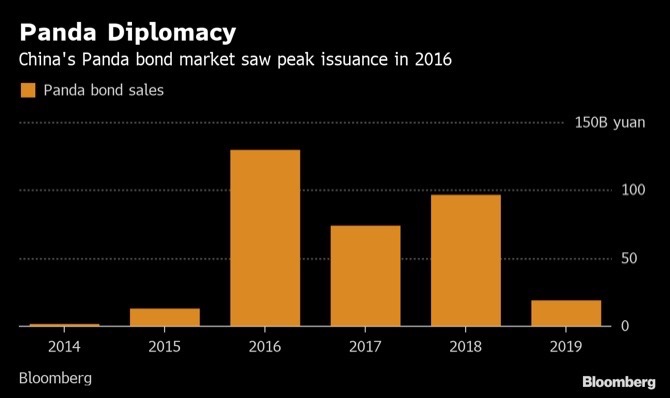 Austria is working on plans to sell Panda bonds as it races with Portugal to become the first euro-zone country to issue debt in the Chinese currency.

Austria’s Treasury Agency signed a memorandum of understanding with Industrial and Commercial Bank of China Ltd. to cooperate on a plan for Austria’s government to issue Panda bonds, according to a release dated April 28 on the official WeChat account of ICBC. The bank was named lead underwriter and bookrunner for the deal, with Bank of China and HSBC as joint lead underwriters, the statement said.

Austria would be the highest-rated sovereign to issue Panda bonds, helping to deepen ties between the two countries, according to the statement. In December, Xinhua reported that Portugal was actively preparing to issue such bonds.

China set up the panda bond market more than a decade ago for offshore issuers of yuan debt. Issuance slumped when China devalued the yuan in 2015, igniting fears of continuous depreciation. In 2016 and 2017, authorities began opening the domestic market to help offset capital outflows and promote greater use of the yuan.

China has vowed to push ahead with opening its bond market to foreign investors, with People’s Bank of China Deputy Governor Pan Gongsheng saying in January it was crucial for the development of the nation’s financial markets. Bloomberg Barclays Global Aggregate Index started adding the country’s government and policy bank notes in April. There are 275 billion yuan (USD41 billion) of Panda bonds outstanding, according to Bloomberg-compiled data.

Poland was the first European sovereign to print Panda bonds in August 2016, followed by Hungary’s debut offering in July, 2017.

The latest agreement was signed after a three- day Belt and Road Forum in Beijing, where leaders from 37 countries attended, including Sebastian Kurz, the Chancellor of Austria. The plan will widen the investor base for Austria’s treasury bonds and encourage Chinese domestic investors to “share the fruit of its economic development,” the statement said. Ina Zhou, Bloomberg