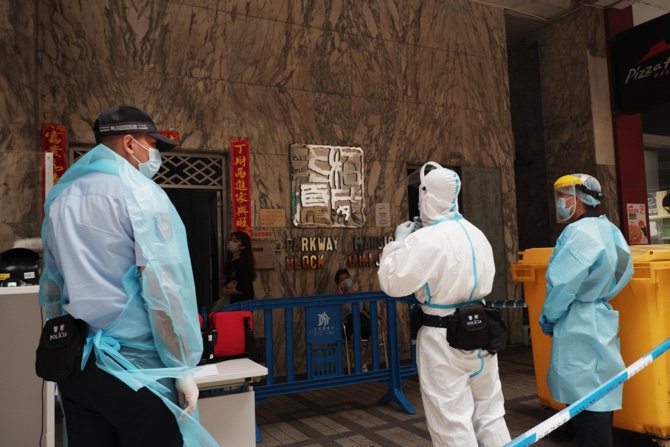 The Unitary Police Service (SPU) has negated rumors circulating over social media platforms that the government has been preparing to issue a citywide mandatory seven-day lockdown.

At the Novel Coronavirus Response and Coordination Center press briefing, a representative from the SPU stated that there is no such plan under consideration. The representative called on the people in Macau to follow updates on the Covid-19 outbreak only through credible and official sources.

The same official remarked that such a possibility is not currently being considered and that such a measure being enacted would depend on a very severe situation eventuating.

Nonetheless, the same authorities noted that as the investigations progress and more people are found to be infected, more buildings will be considered both Yellow and Red zones of confinement.

The last of the buildings to be considered a Red Zone was the Hotel Fortuna in the ZAPE area. This building is thought to be linked to the first cluster as one of the non-residents who was later found to be infected was working at this hotel.

According to the coordinator at the local Center for Disease Control and Prevention, Dr. Leong Iek Hou, the authorities have already found five people who have been infected (three locally and two in Zhuhai) in connection with this hotel and so it was decided to implement isolation and confinement measures.

According to Lo, there are currently over 80 people among guests and hotel workers in the hotel who will remain in isolation. Those in a guest room will remain on the premises, while some staff members will be transferred to a quarantine venue.