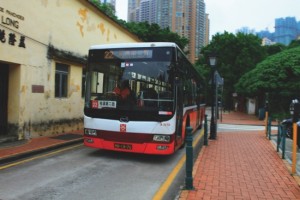 The Transport Bureau has requested a report from the bus operator TCM after one of its 20 natural gas-fueled vehicles caught fire at around 11 a.m. yesterday.
The incident occurred just as the bus was entering the roundabout facing the Hotel Lisboa from the Governador Nobre de Carvalho Bridge. The report on the cause of the blaze must be completed within the week.  The company initially suspected that the fire was triggered by a short-circuit within the motor, ruling out the gas supply as a possible cause. The vehicle had already passed a safety checkup earlier this year, according to the authorities.