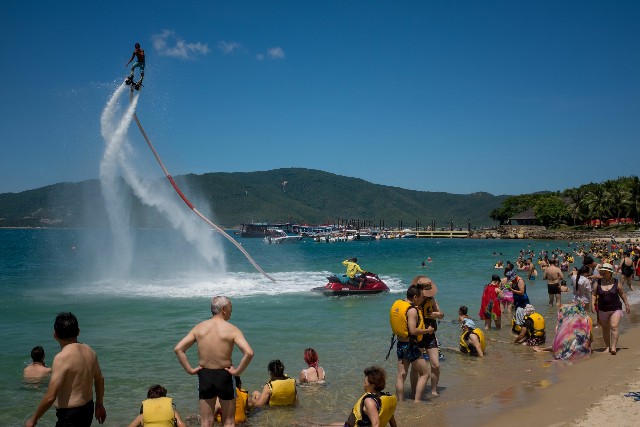 From quiet beaches in Bali to empty rooms in Hanoi’s hotels, pangs from China’s economic malaise and weakening yuan are being felt across Southeast Asia’s vacation belt.
A boom in Chinese outbound travel in recent years that stoked tourism across Southeast Asia is now in reverse gear. The abrupt decline of Chinese travelers is becoming a painful lesson for nations such as Thailand and Indonesia that had become overly dependent on Asia’s top economy.
“The slump in Chinese arrivals and tourism spending is being felt throughout the region,” said Kampon Adireksombat, Bangkok-based head of economic and financial market research at Siam Commercial Bank Pcl. “There’s always a concentration risk when relying on one market, and many countries may not be able to find a replacement for growth fast enough.”
The slump is expected to continue in 2020 if the trade war continues to weigh down the Chinese economy, he said.
Rising incomes over the past decade fueled the wanderlust of middle-class Chinese consumers, making them the world’s largest outbound travel market, according to a McKinsey report, with the total number of outbound trips more than doubling from 57 million trips in 2010 to 131 million trips in 2017.
“Southeast Asia is usually the first destination for Chinese travelers when they opt for farther destinations,” said the report. McKinsey’s 2017 China Outbound Traveler Survey had shown that the highest number of package trips were booked to Southeast Asia.

The China factor
Mandarin-speaking tours, Chinese eateries and Chinese mobile payment services mushroomed from Danang to Yogyakarta, these travelers thronged to Southeast Asian hotspots, lured by their proximity and familiar cuisines.
The pullback now threatens the tourism industry with pockets of overcapacity, after companies and local governments doubled down and poured millions of dollars into expanding resorts, hotels and travel facilities.
The decline is already showing up in some hotel operators’ results. Thailand’s Central Plaza Hotel Pcl reported a softening of its hotel business in the second quarter due to decreasing Chinese demand, Ronnachit Mahattanapruet, the company’s senior vice president, said at an investor briefing last month. Occupancy in its Thai properties dropped 7% in the quarter, and the Bangkok-based operator has 2,040 rooms in the pipeline to add to its existing portfolio of 6,678 rooms.

‘Unrealistic expectations’
The Thai capital is also expecting a new Ritz Carlton by 2023 as part of a $3.9 billion development, while Hilton will manage two hotels due for 2022 opening. On Phuket island, a favorite for beachfront weddings and scuba diving, there will be 18% more hotel rooms by 2024, according to consultancy C9 Hotelworks Ltd. International arrivals in Thailand this year so far have grown only 2%, data from Thai tourism ministry show.
“The supply was based on people’s unrealistic expectations,” said C9’S managing director Bill Barnett.
In Singapore, casino operators Las Vegas Sands Corp. and Genting Singapore Ltd. announced a $9 billion expansion of their resorts earlier this year after the country’s skyline was beamed across cineplexes as the setting of the Hollywood hit “Crazy Rich Asians.”
Marriott International Inc. has 140 hotels in the pipeline across the region, with plans to more than triple its portfolio by 2023 in the Philippines, whose white-sand beaches and turquoise waters are such a draw that the island of Boracay had to close last year for upgrades to its sewage system.
Enamored with the sights made famous in hit movies such as Summer Holiday – a 2000 Chinese romantic comedy film set on Malaysia’s palm-fringed Redang Island – Chinese travelers became the biggest group of visitors to the region, adding $403.7 billion to its gross domestic product in 2019.
In Thailand and the Philippines, tourism grew to account for over a fifth of their GDP – twice the global average.

Boom dissipated
The boom dissipated in the first half of this year as China’s economy slowed, its yuan weakened to historically low levels, and an ongoing U.S.-China trade war weighed on consumer confidence. The decline is also affecting China’s economy at home, as big-ticket purchases like cars and luxury goods slow.
The Thai baht has strengthened the most against the yuan this year among emerging-market currencies, making travel more expensive for Chinese tourists. A boat accident last year that killed 47 Chinese tourists off the island of Phuket also damaged confidence.
In Bali, the tourism promotion board’s deputy chairman, Ngurah Wijaya, sees the hotspot as a victim of its own success. “Internal problems like traffic jams are among the main causes of the decline of Chinese tourists,” he said, adding that those who are still coming are staying fewer days and spending less. “It also seems like they have started to get bored with Bali.” 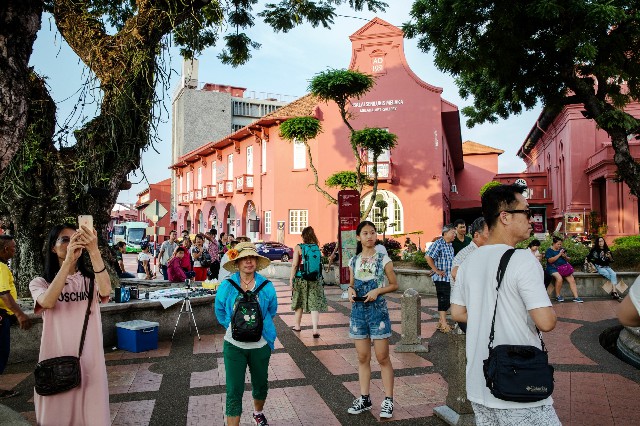 While tourists visit the Dutch Square in Malacca city, Malaysia

Chinese ship
Bilateral tensions after a Chinese ship surveyed underwater oil-and-gas blocks claimed by Vietnam in July may have contributed to the decline in tourists from China, said Vietnamtourism-Vitours’ deputy general director Le Tan Thanh Tung.
To be sure, not every country is facing a sustained decline. Malaysia’s number of Chinese tourists grew 6.2% in the first half of the year to 1.55 million, according to official data. In the Philippines, tourism infrastructure and facilities are relatively under-developed, so it’s not seeing any pull back in hospitality projects, said Richard Laneda, gaming and property analyst at COL Financial Group Inc.
Still, the slowdown in tourism weakens another growth pillar for Southeast Asia at a time when exports are taking a knock from the trade war. The International Monetary Fund in its July outlook pared back its forecast for growth in the region’s top five economies to 5% from 5.1% in its April report, signaling a further slowdown.
Countries are now trying to diversify their outreach efforts to lure visitors from other nations.
Thailand waived visa fees for Indian tourists earlier this year and airline and hotel operators are trying to boost connections between the two countries.
Vietnam, where Chinese tourists accounted for a third of 15 million foreign visitors last year, is setting up tourism promotion offices in the U.K. and Australia, while direct flights between India and Vietnam are being planned for October.
But in the short to medium term at least, the hole left behind by Chinese travelers seems too large to fill.
“Chinese tourists are the largest group of visitors by numbers,” said the Bali Promotion Board’s Wijaya. “Even the rise in holiday makers from other countries cannot compensate for their absence.” Siraphob Thanthong-Knight, Harry Suhartono & Nguyen Xuan Quynh, bloomberg