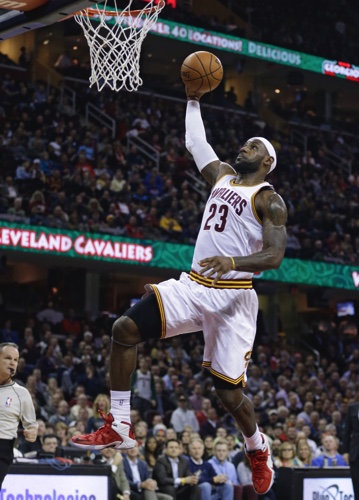 LeBron James scored 29 points, including 16 in the first quarter, as the Cleveland Cavaliers broke a four-game losing streak with a 106-74 win over the Orlando Magic yesterday.
After bluntly assessing his own performance at practice, saying, “I stink,” James took control early and sparked his team to a much-needed comfortable win.
After averaging 18.5 points and shooting 41 percent from the field in the losing streak, James was 9 for 17 from the field Monday and tied a season-high with 11 assists while not playing the fourth quarter.
James hit four shots from the field, including a 3-pointer, made all seven of his free throws and had four assists in the opening period. He finished the first half with 22 points, including a fadeaway jumper from the top of the key to end the second quarter.
Anderson Varejao scored 14 points while Kevin Love and Kyrie Irving each added 12.
Blake Griffin had 22 points and a season-high 16 rebounds for Los Angeles, and Chris Paul had 22 points and a season-high 15 assists as the Clippers downed Charlotte 113-92 for the Hornets’ sixth straight loss.
Griffin was 10 of 23 from the field and finished one assist shy of a triple-double.
The Clippers were 15 of 32 from 3-point range, while the Hornets were just 2 of 20. Jamal Crawford had 21 points and J.J. Redick added 17 and the sharp-shooting duo combined to go 9 of 17 from beyond the arc.
Paul came in averaging had 9.5 assists for the Clippers (8-5).
Portland’s LaMarcus Aldridge had 15 of his 33 points during a pivotal third quarter to help the Trail Blazers defeat Philadelphia 114-104, sending the 76ers to their 14th straight loss to open the season.
Wesley Matthews added 17 points, Damian Lillard had 16 and Robin Lopez chipped in 12 for Portland (11-3), which won its eighth in a row.
Michael Carter-Williams led Philadelphia (0-14) with 24 points.
The 76ers moved within one loss of matching the club record for consecutive losses to begin a season and will look to avoid an 0-15 opening when they host Brooklyn.
The Toronto Raptors beat the Phoenix Suns 104-100 for their fifth straight win after Jonas Valanciunas had a career-high 27 points and 11 rebounds, and DeMar DeRozan scored 23
Houston’s James Harden scored 36 points to lead the depleted Rockets to a 91-86 victory over slumping New York Knicks, while Donald Sloan scored 29 points and seven Indiana players scored in double figures in the Pacers’ 111-100 victory over the Dallas Mavericks.
Jimmy Butler scored 25 points and Pau Gasol added 23 points and nine rebounds to lead the Chicago Bulls to a 97-95 win over the Utah Jazz. AP