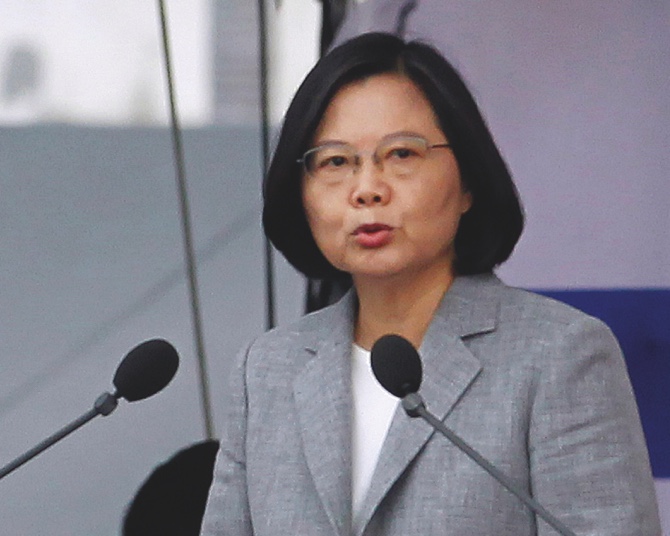 China confirmed yesterday that it is holding three Taiwanese on suspicion of committing subversion or other crimes against the Chinese state, part of a trend that has prompted a travel warning from the island’s government.

The three were suspected of carrying out activities harmful to national security, spokesman for the Cabinet’s Taiwan Affairs Office Ma Xiaoguang told reporters yesterday. Ma said their cases had already entered the trial stage and their families had been contacted.

“The mainland side has consistently attacked activities harmful to national security using the law and this is normal law enforcement behavior,” Ma said. He denied there had been a particular spike in such cases or that they had been in any way abrupt or unexpected.

Taiwanese reports have identified the three as Tsai Chin-shu, chairman of an organization promoting exchanges between China and Taiwan; Taiwanese democracy activist Lee Meng-chu; and retired professor, Shih Cheng-ping. Tsai and Shih both disappeared last year, while Lee dropped out of sight in August.

The cases have led to calls for reduced travel to both mainland China and the semi-autonomous Chinese city of Hong Kong, which has been shaken by months of violent anti-government protests. A spokeswoman for Taiwan’s ruling Democratic Progressive Party urged those traveling to pay attention to safety and inform others of their whereabouts at all times.

Underlying those concerns is a suspicion that China is detaining more Taiwanese as part of general campaign to isolate and punish the island’s democratically elected President Tsai Ing-wen for refusing to meet Beijing’s demand that she recognize Taiwan as part of China.

The government in September said it has received 149 reports of Taiwanese missing on mainland since Tsai took office in May 2016, with 67 of those still unaccounted for.

A Taiwanese activist, Lee Ming-che was sentenced to five years in prison in November 2017 on the charge of subversion of state power. His wife, Lee Ching-yu, has complained that Chinese authorities in the southern province of Hunan, where her husband is being held, have repeatedly canceled or postponed prison visits. Lee Ming-che is reportedly in poor health and has lost a considerable amount weight since being incarcerated.

Tsai’s case has been singled out in Taiwan as particularly worrisome because he was neither a pro-democracy activist nor a support of Taiwan’s formal independence from China. Taiwan says he disappeared after checking out of his hotel in the Fujian province city of Quanzhou.

Also at the briefing, Ma repeated claims that Taiwan was fomenting the protests in Hong Kong, an accusation for which Beijing has provided no evidence.

“What [Taiwan] should do is immediately retract the ‘black hand’ it has extended to Hong Kong,” Ma said, using a term for secret plotting.

China proposes taking control of Taiwan under the “one country, two systems” framework it has implemented in Hong Kong, though the idea has little support on the island. AP