Beijing protests to India over Modi’s visit to disputed area 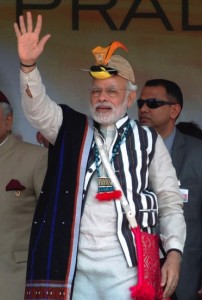 China summoned India’s ambassador over Prime Minister Narendra Modi’s visit to a disputed border region in the Himalayas, a long-festering irritant in relations between the Asian giants.
Modi on Friday visited the northeastern Indian state of Arunachal Pradesh, an immense territory of nearly 84,000 square kilometers that China claims as part of its Tibet region.
Modi marked the 28th anniversary of Arunachal Pradesh being declared a state, opened a train line and called for hydropower projects to spur regional growth.
The Chinese Foreign Ministry said late Saturday that Vice Foreign Minister Liu Zhenmin had called in Indian Ambassador Ashok Kantha to express “strong dissatisfaction and firm opposition” to the visit, saying it undermined China’s territorial sovereignty.
Liu said China places importance on developing relations with India. It called for New Delhi not to take any action that may complicate the issue and stick to resolving it through bilateral negotiations.
China and India fought a brief but bloody frontier war in 1962. They agreed to a line of actual control in 1996 and began talks on settling the dispute. While analysts see little danger of a conventional war over the border, frequent skirmishes make it difficult to achieve a lasting resolution. AP