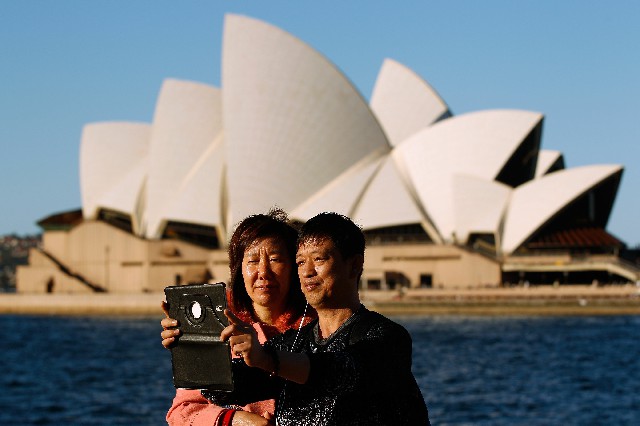 Australia is losing its appeal for Chinese tourists and students as the harmful trade war between the U.S. and Beijing, paired with a slowing economy at home, spooks them into staying put.
The number of visitors from China increased just over 1% in the 12 months through July, matching the weakest rate in nine years, while the growth in students traveling Down Under to attend university has also slowed rapidly. Even a weakening Aussie dollar hasn’t managed to halt the downturn.
“We suspect the trade dispute is a large reason for the decline,” said Hayden Dimes, an economist at Australia & New Zealand Banking Group Ltd. It “creates uncertainty for both visitors and, in particular, students.”
Dimes reckons that if the slowdown in Chinese students and visitors is prolonged, it could cost Australia’s economy – the most China-reliant in the developed world – about A$800 million ($543 million) over the next two years. Austrade, the government’s trade promotion and investment attraction agency, is already scaling back forecast tourist arrivals.
Australia has so far mostly benefited from the U.S.-China trade dispute: Beijing’s stimulus to offset weaker shipments has boosted demand for its commodities and the lower Aussie dollar is making firms more competitive. Indeed, the slowdown in Chinese tourism and education in the face of a weaker currency is surprising given it makes cities like Sydney cheaper for visitors. Services are increasingly important to Australia’s economy. Over the past five years, such exports have grown at an average of about 13% per annum, Dimes said, noting tourism and education’s share have both increased. China is the single largest country for Australia for international students and visitors, accounting for about 26% and 15%, respectively, he said.
“Weakening economic activity and political tensions around technology, communications and trade have influenced Chinese tourist numbers,” said Ryan Felsman, a senior economist at the securities unit of Commonwealth Bank of Australia. “The slowdown highlights some downside risks to Australia’s services sector.”
Still, there is some light emerging from the trade war’s instigator. North American tourists are flocking to Australia in record numbers, inspired by the U.S.’s record economic expansion as well as the Aussie’s 16% slump against the greenback since the beginning of last year, and weaker Canadian dollar. Bloomberg