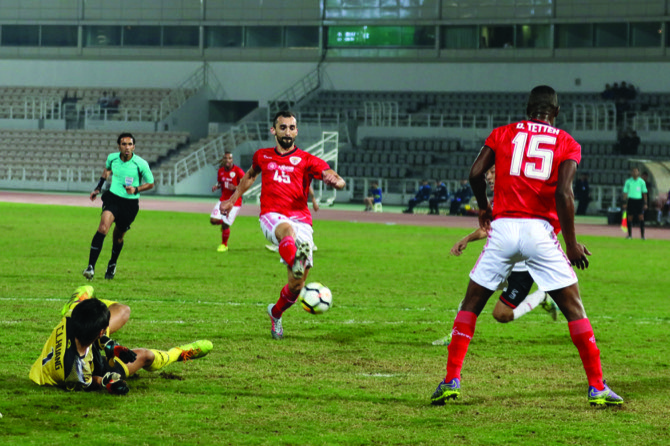 Benfica Macau won the second match of the AFC Cup securing a 3-2 away win against DPR Korea’s Hwaepul SC at Kim Il Sung Stadium. Benfica now has two wins from the first two games in the debut AFC Cup campaign.

The final scoreline was the same as in their Group I opener against Hang Yuen FC last week, but yesterday’s result, in front of 22,000 people in the DPR Korea capital is one of the finest in Macau’s football history. The Macau champions made a sensational recovery as they overtook the opponents on the scoreboard.

Leonel, who also scored a double against the Taiwanese club in the memorable comeback on March 7, opened the scoring after just seven minutes in Pyongyang, only to see parity restored in the 13th minute via Hwaepul captain Jong Chol-hyok from the penalty spot.

Kyrgyz international David Tetteh then restored Benfica Macau’s lead just before half-time to make the score 2-1 to the visitors at the break.

Just four minutes into the second half, Hwaepul SC forward Pak Chol-song leveled the scores once more, before the final say went to Benfica Macau and Leonel who stunned the home crowd with the winner 15 minutes from time.

The victorious Macau team now sits on six points in the standings and will return to Pyongyang to face 4.25 SC on April 11. Hwaepul SC is yet to pick up a point in their maiden campaign, and they will be  hosting Hang Yuen FC next.