Besieged HK university finds only one person in search 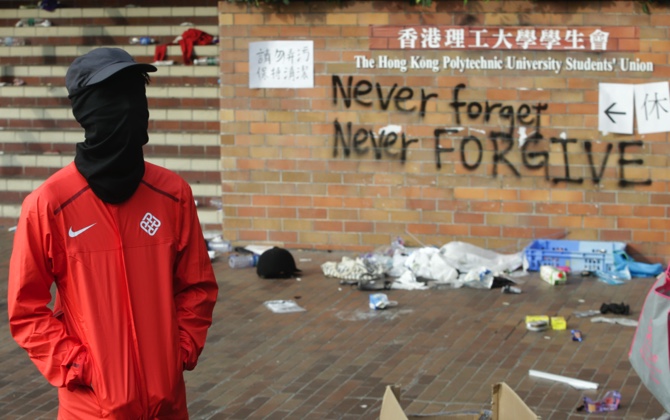 A Hong Kong university team looking for protesters still hiding after a 10-day siege by police only found one person after six hours.

Alexander Wai, vice president of Hong Kong Polytechnic University, said yesterday the 50-person team comprised of counselors, medical staff, social workers and security personnel found a woman older than 18 who wasn’t a student at the school. A counselor was persuading her to leave the premises, Wai said.

A few people might still be hiding in the warren of buildings on the urban campus, trying to avoid arrest. The search apparently didn’t find a man who told reporters before dawn that he is happy living at the university and “everyone can stop worrying about us.”

Police have cordoned off the area to try to prevent anyone from escaping.

Wai said there was no deadline for the teams to clear the campus before police enter in order to defuse explosives and clear other dangerous items. They will continue the search today and may add more people.

At a morning briefing, Chief Executive Carrie Lam said that a “relatively small number of people” remained on campus and called for them to leave as soon as possible, without giving a concrete figure.

Police are setting up a work panel whose aim will be to persuade the last protesters to go and they will only enter PolyU’s campus “at appropriate times,” she added. “Police have adopted a humanity-oriented approach with flexibility to deal with PolyU issue so far. Our goal is to solve the problem in a peaceful way,” she said.

Hong Kong police said yesterday that they are in close communication with the university and would stick to the principles of “peaceful method” and “flexible approach” to solve the situation. Police won’t arrest those with medical needs immediately but will take down their personal details, photograph them and follow up later.

“For those who leave the campus and do not have medical needs, the Police will enforce the law following existing mechanism and re-emphasise that they are guaranteed fair treatment,” the police force said in a tweet.

University President Teng Jin-guang told reporters last Wednesday that some 100 protesters remained on the campus, 20 of whom were PolyU students.

The siege at the Kowloon university initially raised fears of a crackdown on the scores of protesters trapped inside. Jarring images from the school showed fires, clouds of tear gas and flaming vehicles amid running battles between police and protesters.

It came amid chaos that paralyzed parts of the city as protesters disrupted morning commutes and police fired tear gas in the central financial district. MDT/Agencies