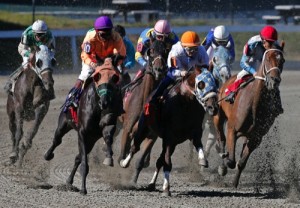 New England’s storied thoroughbred racing industry looks like it’s trotting to a close.
Suffolk Downs, the region’s lone remaining track, is shutting down this year, a victim of changes in a gambling industry that now revolves around lotteries and casinos.
The once-grand track, which hosted Seabiscuit and other premier horses of the day, had hoped to revive its sagging fortunes with a USD1.1 billion Mohegan Sun casino project. But after the proposal was rejected last week, operators said they had no choice but to close the nearly 80-year-old facility.
Live racing is set to end Oct. 4. Betting on televised races — or simulcasts — will be offered until about December.
State gambling regulators meeting last week said they’ll consider proposals to keep the local industry going so long as they meet an Oct. 1 deadline. But with just days to go and no immediate proposals on the table, some industry leaders fear this racing season spells the end of an era for Boston.
“It was a great, great part of the sports tradition we had here,” says Anthony Spadea, president of the New England Horsemen’s Benevolent and Protective Association. “Now, there’s so much competition for the entertainment dollar.”
The Thoroughbred Racing Associations says the number of tracks in the U.S. has steadily declined, from around 120 venues three decades ago to 100 or fewer today.
“We’re losing more major city tracks as casinos expand,” says Christopher Scherf, executive vice president of the Maryland-based group.
Industry experts say the track’s closing will be felt across the country.
One less track means fewer owners producing thoroughbreds at a time when the number of racehorses being born each year has decreased markedly.
The loss of Suffolk Downs also means fewer jobs for migrant horse workers and fewer bettors for nationally simulcast races.
Horse breeders and owners say it’s critical the state finds a way to hold races in 2015. Otherwise, many horse farm owners and breeders may simply move on.
“Once that happens, it’s going to be hard to get them back,” says George Brown, chairman of the Massachusetts Thoroughbred Breeders Association. “They’re not going to wait two years for a proposal to materialize. We’ve got to keep them here.”
George Carney, who owns Raynham Park, a simulcast facility south of Boston, says he expects to meet the Oct. 1 deadline with a plan to return thoroughbred racing to the Brockton Fairgrounds.
Suffolk Downs’ owners, which include prominent casino developer Richard Fields, say they’re also open to proposals for their track.
But after losing nearly $60 million over the last seven years, they’re not interested in running the races themselves and are eyeing other development options for the property, which is served by two subway lines.
In the meantime, horse owners and others working at Suffolk Downs’ stables face an uncertain future.
Regulators say they’re committed to finding ways to help displaced workers. The local industry is estimated to provide some 1,200 permanent and seasonal jobs. Philip Marcelo, Boston, AP