BlueOcean to represent Tencent in town 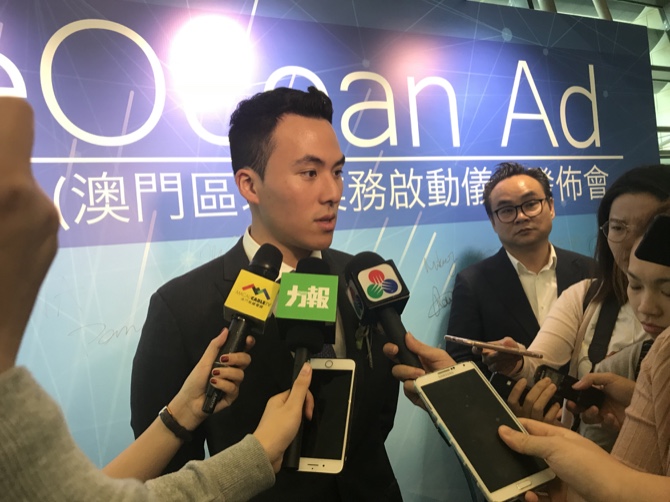 Local advertising company BlueOcean Ad has been nominated as the representative of Chinese company Tencent’s global advertising business in Macau.

The launch ceremony of Tencent’s global advertising business was held at the Macau Tower yesterday.

Chairman of BlueOcean Ad, Orlando Ho, said during his speech that his company will use the most advanced science and technology to spread its customers’ information.

Currently, Tencent has more than one billion active users globally, with Tencent products varying from WeChat and QQ to news outlets and music platforms.

The penetration rate of WeChat products in mainland China exceeds 90 percent of the population. WeChat is also the most widely used social network and communication software in both mainland China and Macau.

Besides focusing its business on mainland China, Macau and Hong Kong, BlueOcean Ad is also attempting to develop its advertisement business in North America, Europe and Australia because these areas are places where “many mainlanders go.”

“Certainly, I hope we can collaborate with all of Macau’s merchants. […] Currently, we are negotiating with companies from the tourism industry, and [the company] is also discussing with governmental organizations regarding how to promote Macau’s tourism industry,” said Orlando Ho. “This ad is [also] an advertisement in WeChat. We will release ads specifically for each individual customer, for instance, in WeChat Moments,” Orlando Ho explained. All kinds of local hotels are also targets of BlueOcean Ad.

In January of 2015, the first batch of commercial advertisements appeared in “WeChat Moments.”

According to WeChat statistics, on average, each WeChat user checks his “moments” feature ten times a day.

WeChat Moment advertisements are displayed in a similar fashion to that of an original post made by a WeChat friend.

WeChat supports six types of ads. Prices of “Wechat Moments” ads are based on the per-thousand-exposure rate of each ad.

In order for an ad to appear in “Wechat Moments,” the cost per thousand exposures is RMB180, or RMB120 in first or second tier mainland cities, respectively, and RMB60 in all other mainland cities.