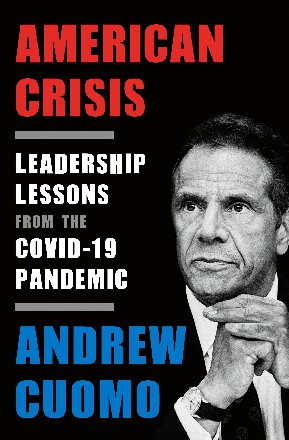 Gov. Andrew Cuomo condemned the federal government’s coronavirus response and lauded his own leadership efforts in a new book released yesterday that offers a few new details — but not many — about New York’s battle against the pandemic.
The Democrat’s book, “American Crisis: Leadership Lessons from the COVID-19 Pandemic,” delivers a retelling of his efforts to contain the virus as it ravaged his state in spring.
In it, Cuomo describes trying to placate President Donald Trump in order to get needed hospital beds, ventilators and other supplies for New York. He detailed the state’s success at rapidly ramping up testing capacity and his worry that New Yorkers wouldn’t heed calls to stay at home to help avoid a catastrophic surge in hospitalizations.
Cuomo also addresses a frequent criticism of his leadership style: that he is overly controlling.
“You show me a person who is not controlling, and I’ll show you a person who is probably not highly successful,” he wrote.
As for his mistakes, Cuomo concedes only a few. Among them, he said, he waited too long to mandate that New Yorkers wear masks.
Other problems with New York’s virus response get less ink, including the state’s struggles to help nursing homes acquire enough protective gear or staff. Cuomo said Republicans have unfairly politicized the thousands of patient deaths at New York nursing homes.
“We have seen how the virus is confronted and defeated,” he said. “New York didn’t do everything right. But there are lessons we can learn that will lead to victory.” AP