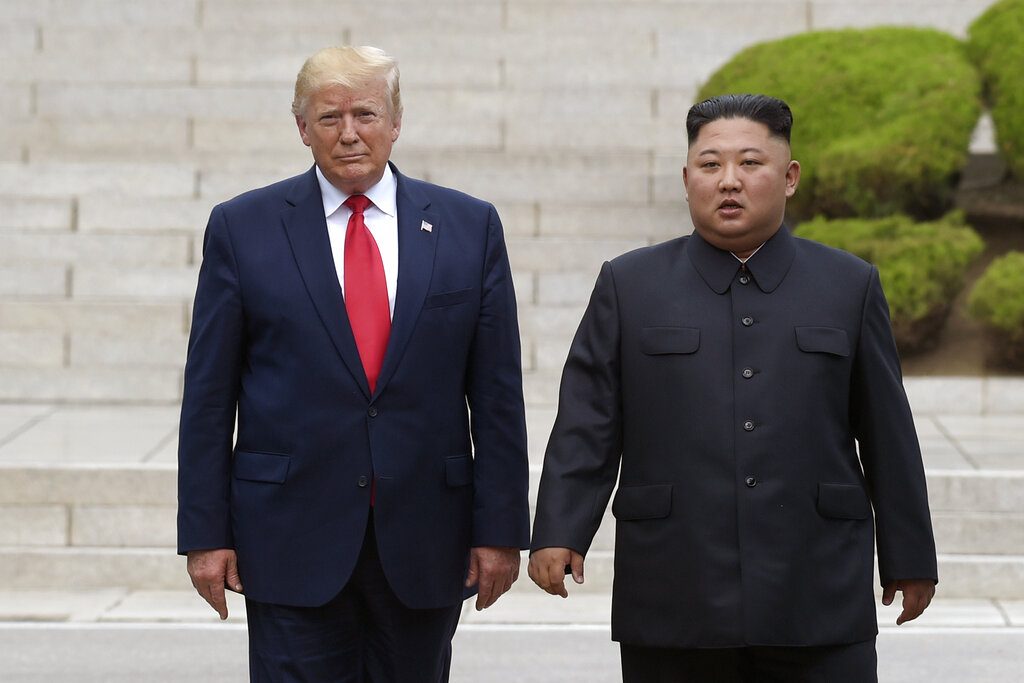 President Donald Trump’s comments about the threat from the novel coronavirus attracted widespread attention after excerpts from journalist Bob Woodward’s book “Rage” were released. The excerpts also provide new details about the president’s thoughts on North Korea’s Kim Jong Un, racial unrest and a mysterious new weapon that Trump claims other world powers don’t know about.
Some of the other topics covered in the book, which was based on 18 interviews that Woodward conducted with Trump between December and July and with others (excerpts from the book were reported by The Washington Post, where Woodward is an editor, and CNN):

NORTH KOREA
Woodward wrote that Trump said he was impressed with Kim when he first met the North Korean leader in Singapore in 2018 and that Kim was “far beyond smart.” Trump also said that Kim “tells me everything” and even gave the president a graphic account of how Kim had his own uncle killed.
As he engaged in nuclear arms talks with Kim, Trump dismissed intelligence officials’ assessments that North Korea would never give up its nuclear weapons. Trump told Woodward that the CIA has “no idea” how to handle Pyongyang.
Trump also dismissed criticism about his three meetings with Kim, claiming the summits were no big deal. Critics said that by meeting Kim, Trump provided the North Korean leader with legitimacy on the world stage.
“It takes me two days. I met. I gave up nothing,” said the president, who likened North Korea’s attachment to its nuclear arsenal to somebody who is in love with a house and “they just can’t sell it.”
Kim welcomed Trump’s attention, calling the president “your excellency” in a letter. Kim wrote to Trump that he believed the “deep and special friendship between us will work as a magical force.”

RACIAL UNREST
In June, after federal agents forcibly removed protesters from Washington’s Lafayette Square near the White House to make way for Trump to stage a photo opportunity outside a church where he held up a bible, Trump called Woodward to boast about how he was for “law and order.”
“We’re going to get ready to send in the military slash National Guard to some of these poor bastards that don’t know what they’re doing, these poor radical lefts,” Trump told Woodward, who recorded Trump.
Later that month, Woodward asked the president if, as a white man, he had a responsibility to better “understand the anger and pain” felt by Black Americans.
“No,” Trump replied. “I don’t feel that at all.”
As Woodward pressed Trump about discrimination and inequalities suffered by Black people over the years, the president pointed to how the unemployment rate for Black Americans fell before the pandemic.
When the two spoke again about race relations on June 22, Woodward asked Trump whether he thought there was systemic racism in America.
“Well, I think there is everywhere,” Trump said. “I think probably less here than most places. Or less here than many places.”
Asked by Woodward whether racism “is here” in the United States in a way that affects people’s lives, Trump replied: “I think it is. And it’s unfortunate. But I think it is.”

MYSTERY WEAPON
In discussions with Woodward about rising tensions in 2017 between the U.S. and North Korea, Trump said: “I have built a nuclear — a weapons system that nobody’s ever had in this country before. We have stuff that you haven’t even seen or heard about. We have stuff that (Russian President Vladimir) Putin and (Chinese President Jinping) Xi have never heard about before. There’s nobody — what we have is incredible.”
Woodward writes that sources, who spoke to him on condition of anonymity, confirmed that the U.S. military had a “secret new weapons system.” But the sources did not provide details and told Woodward, according to the book, that they were surprised Trump had disclosed it.
Trump national security adviser Robert O’Brien told Fox News’ “Special Report” on Wednesday that the president did not talk about any specific weapon system. “We’re always on the cutting edge and we’ve always got something out there that our adversaries don’t know about,” O’Brien said.

FORMER TOP OFFICIALS IN TRUMP ADMINISTRATION
Woodward’s book quotes Jared Kushner, the president’s son-in-law and senior adviser, as saying, “The most dangerous people around the president are overconfident idiots.” The book also quotes Kushner as saying that he advised people to think about “Alice in Wonderland” when trying to understand the Trump presidency. The novel is about a girl who falls through a rabbit hole and Kushner, according to Woodward, singled out the Cheshire Cat, whom he said had endurance and persistence, not direction.
Woodward’s book also discusses how some top-level administration officials contemplated quitting.
Then-Defense Secretary James Mattis went to the Washington National Cathedral to pray about the nation’s future under Trump as commander in chief. According to Woodward’s book, Mattis once told then-National Intelligence Director Dan Coats, “There may come a time when we have to take collective action” because Trump is “dangerous” and “unfit” to be president.
Woodward says Mattis told Coats, “The president has no moral compass.”
Coats, the book says, replied: “True. To him, a lie is not a lie. It’s just what he thinks. He doesn’t know the difference between the truth and a lie.”
Coats is a former senator from Indiana and was recruited into the administration by Vice President Mike Pence, who is also a Hoosier. “How are you stomaching” the Trump presidency, Coats’ wife, Marsha, once asked Pence at a White House dinner.
“I think he (Pence) understood. And he just whispered in my ear, ‘Stay the course.'”