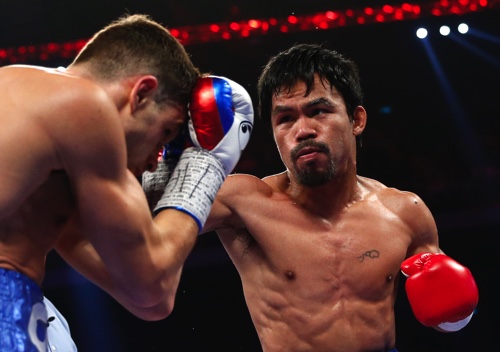 It may take a lot of money for the dream fight between Manny “Pacman” Pacquiao and Floyd “Money” Mayweather Jr. to become a reality.
The popular American sports magazine reported this week that Mayweather would only agree to fight Pacquiao if he gets two-thirds of the revenue in a super fight that is likely to break all existing records – money-wise.
Sports Illustrated Chris Mannix wrote the story after a source close to Mayweather suggested that such asking price could be the biggest obstacle for the dream match to happen.
“There continue to be indications that the finances of this anticipated showdown will be a significant obstacle,” Mannix said in his story.
Top Rank promoter Bob Arum quickly denied Mayweather’s claim in the same story, saying that he has been in close contact with CBS CEO Les Mooves to convince Mayweather to agree on the terms of the bout.
CBS is the parent company of Showtime, which has the rights to air Mayweather’s fights.
“Based on my conversations, that is not accurate,” Arum said in the Sports Illustrated story, which was abundantly quoted by the Filipino press.
Also according to the Illustrated, a promoter from United Arab Emirates – M. Akbar Muhammad – offered Mayweather USD110 million to stage the fight in Abu Dhabi although Arum isn’t privy to the said offer.
Pacquiao has shown his willingness to make the fight happen after his mastery of Chris Algieri in Macau’s Cotai Arena recently. He and his team have even used social media to taunt and convince the Las Vegas-based Mayweather to finally settle the score in the ring.
In some American articles, Mayweather has been labeled as “Money” for his penchant to take the biggest chunk of the pot. MDT

According to Las Vegas oddsmakers, Mayweather is a -300 favorite and Pacquiao a -250 underdog, translating to a win of just USD100 for a $300 wager on Mayweather and a fat $250 return on just $100 on Pacquiao, the Manila Bulletin reported.
In case a Mayweather-Pacquiao fight takes place, they are expected to meet at welterweight (147 lbs) or even at a super-welter catch weight of 150 or 151.
Since overwhelming and upsetting Oscar Dela Hoya in 2008, Pacquiao has entered a fight the favorite. But it won’t be that way when he goes up against Mayweather, who has beaten Miguel Cotto, Shane Mosley, Canelo Alvarez and Marcos Maidana rather easily the past couple of years.
Pacquiao is fresh from a lopsided win over Chris Algieri in Macau and is craving to finally face off with Mayweather in what will turn out to be the richest fight in history of the sport.
Pacquiao, who turns 36 on Dec. 17, said he is willing to sacrifice a lot of things so as to make the fight a reality.