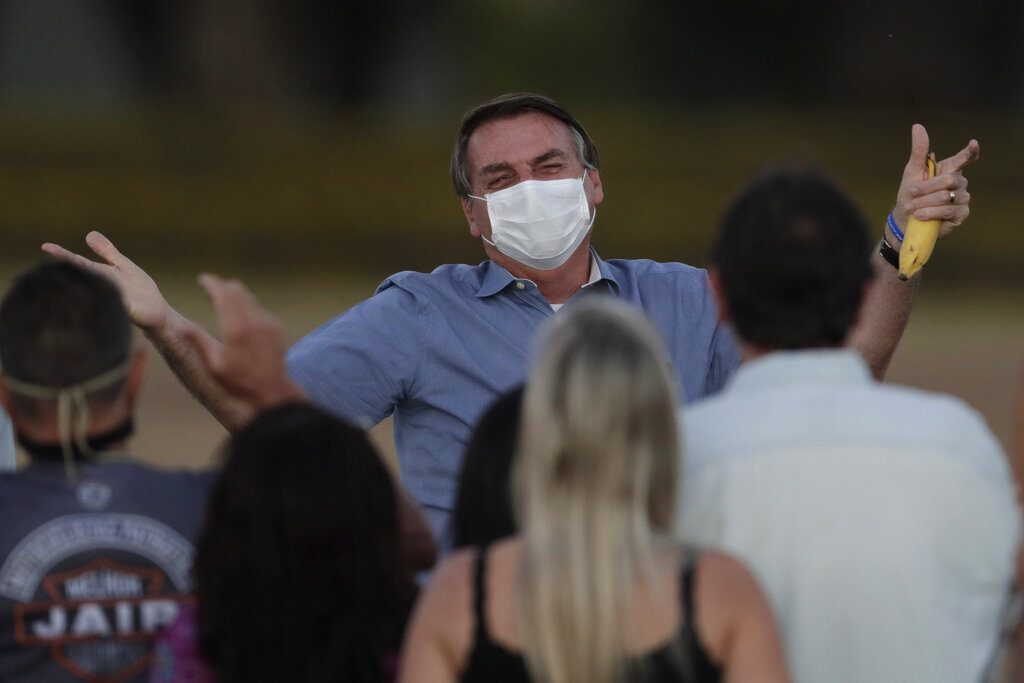 Brazil’s President Jair Bolsonaro, who is infected with Covid-19, wears a protective face mask as he talks with supporters during a Brazilian flag retreat ceremony outside his official residence the Alvorada Palace, in Brasilia, Friday (AP Photo/Eraldo Peres)

BRASILIA — Brazilian President Jair Bolsonaro said today (Saturday) that he had tested negative for the new coronavirus, based on a fourth test since he said July 7 that he had the virus. He later went for a ride on a motorcycle, mingling with wellwishers as he has often done since the beginning of the pandemic.
“Good morning everyone,” Bolsonaro wrote on Facebook after reporting that the test was “negative.”
The 65-year-old leader didn’t say when he did the new test. On Wednesday, he had tested positive for the third time.
Bolsonaro also posted a photo of himself with a box of the anti-malaria drug hydroxychloroquine, although it has not been proven effective against the virus.
Shortly after disclosing the negative result, Bolsonaro left the presidential residence on a motorcycle. Accompanied by security guards, he went to a motorcycle shop. On the way out, he took pictures with people nearby, removed his mask and put on his helmet.
Upon returning to the Alvorada Palace, his official residence, Bolsonaro greeted motorcyclists and gathered with them to take photos.
Bolsonaro had spent many weekends since the beginning of the pandemic in close proximity to supporters, sometimes without wearing a mask.
On Thursday, he was photographed without a mask while talking to some sweepers in the garden of the presidential residence.
Brazil, Latin America’s largest nation, is one of the outbreak’s epicenters. According to the Brazilian government, on Friday there were 85,238 confirmed deaths due to the new coronavirus. The country has 2,343,366 confirmed cases. The real numbers are believed to be higher.
On Monday, two more ministers in the Cabinet of Brazilian President said they have tested positive for the new coronavirus: the 65-year-old minister of citizenship, Onyx Lorenzoni, and Milton Ribeiro, the 62-year-old minister of education.
Bolsonaro’s administration last week completed two months without a health minister.
The interim minister, Gen. Eduardo Pazuello, who had no experience in the field before April, is facing pressure to leave the job. He took over after his predecessor, a doctor and health care consultant, quit in protest over Bolsonaro’s support for the use of hydroxychloroquine and chloroquine, a related drug, as a treatment for COVID-19.