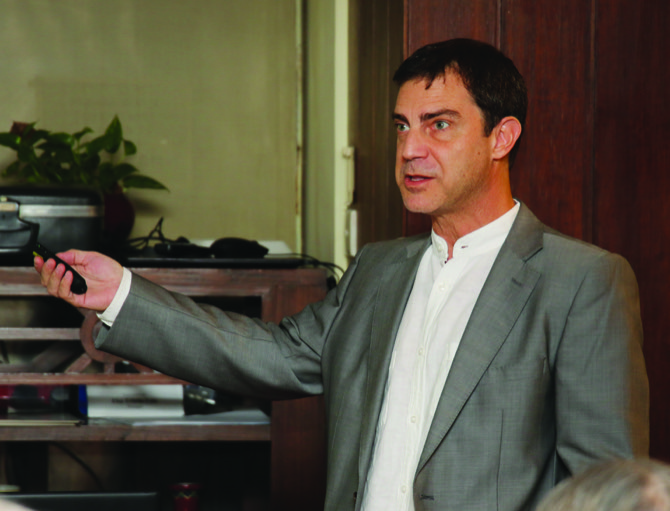 Brazil’s economic growth in the past few years has been directly related to China’s growth and trade, and this might be an influence on the policies of the newly-elected president, Jair Bolsonaro.

At least that is the view of Andrés Malamud, an Argentinian- born senior research fellow at the Institute of Social Sciences of the University of Lisbon, who presented a debate on “Brazil after the election”  this week at C&C Club.

According to the researcher,  political experts were of the opinion that in the past the election of a president with a tough stance on China,  like Bolsonaro, was unlikely  due to the importance of China and Sino-Brazilian relations in the growth of Brazilian economy over the years.

During the presentation regarding the past and present status of Brazilian social and economic figures, and the relationship between these factors and Brazilians’ support of Bolsonaro’s presidency, Malamud noted, “if Brazil bets on [the furthering of relations with] the U.S.A., it will come out losing… since 18 percent of all Brazilian commerce is [dependent] on China.” He further remarked that “if Brazil cuts [relations] with China, Brazil will fall.”

In the opinion of the Latin- American political experts, when Bolsonaro assumes the leadership of the government, he will have to refrain from expressing some views. This was especially apparent during the election campaign, such as when Bolsonaro accused China of having a “predatory attitude” in the way it related to Brazil, the acquisition of Brazilian corporations, namely in the energy and mining sectors, and the use of its privileged position as a result of furthering relations between China and the Portuguese-speaking countries.

In this sense, Malamud believes that Bolsonaro has little chance “if he wants to finish his mandate as president,” steer Brazil’s political direction towards the U.S.’s and adopt a “Trump style” personality, which Bolsonaro has expressed appreciation for and wants to follow.

That said, the researcher also mentioned that Bolsonaro already has a history of creating “friction” in Sino-Brazilian relations. This was apparent during his visit to Taiwan, which was seen as a provocation by the Chinese central government.

When questioned by the audience, Malamud predicted that although the new Brazilian president will continue with his “pro-American and anti-China speech,” he will also “probably continue the relations with China as they are now.”

As for the Brazilian election and the results, Malamud showed that the possibility of the people choosing Bolsonaro was “foreseeable,” pointing to the existence of a system of electoral representation in Brazil, in both the Senate and the Presidency election.
If “there is a great fragmentation with a huge number of political parties,” and the representation is granted by different wins in different states during the presidential elections, “there is always a bipolarization that is very localized in certain areas of the country.” Malamud noted that the bipolarization was happening in separate areas of the country and this is what “has been avoiding major clashes between people.”

By using statistics and their evolution over time, the scholar tried to explain how factors such as the high crime rate, especially homicides and corruption (namely corruption directly involving members of the government and former presidents) played in favor of Bolsonaro’s election.