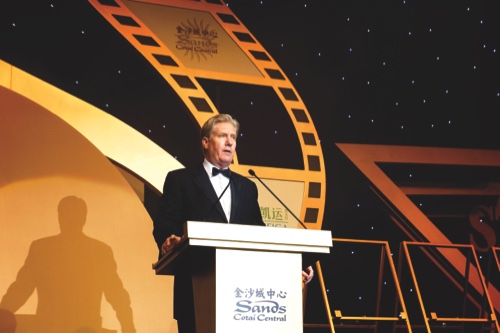 Sands China CEO and president Edward Tracy has announced his retirement today after almost five years running LVS’ most lucrative gaming operation and amid Macau’s worst downturn on record.
“Mr. Tracy has decided to retire” effective March 6, SCL board said in a filing to the Hong Kong Stock Exchange early today. “He will be engaged by the company as a consultant from March 7, 2015,” it said. “Mr. Tracy will continue to work with the senior management team during the transition and consultancy.”
Tracy will step down as CEO and president, as well as a director of Sands China and its subsidiaries, the filing reads.
Mr Tracy was not available for comment nor was he quoted in the note. However, a comment from LVS Chairman and CEO Sheldon Adelson was sent a few hours ago to the Times:
“Ed has played an important part in our growth and success in Macau and we will always be grateful for his many contributions.  We wish him the very best as he returns to the United States to focus on his family and his health.”
A gaming analyst, quoted by GamingCompliance, who requested anonymity said Tracy’s importance to the company extended beyond Macau.
“In my view, Mr. Tracy did a great job at repairing relationships with the government (both Macau and Beijing) and that has been done quietly and without fanfare,” the analyst said. “His shoes will be tough to fill.”
“Among Ed’s many accomplishments was building a team of senior leaders who will help carry our momentum forward,” Adelson said in the note.
Ben Lee, managing partner of gaming consultancy IGamiX Management & Consulting, said Tracy stabilised the company after the turmoil of the Steve Jacobs’ era, during which the company’s relationship with Macau’s authorities hit rock bottom.
Tracy was “instrumental in Sands China recovering their relationship with the Macau government”, Lee told GamblingCompliance.
“He came in at a time when they needed a diplomat to salvage what was left of their relationships with various tiers of local stakeholders, and he performed the statesman role exceptionally well,” he said.
“It will be a loss to Macau’s gaming industry to see him go,” Lee added.
Tracy has also been notable for his enthusiasm for non-gaming attractions, such as pop concerts and boxing spectaculars, which has helped Sands China maintain a conspicuous lead in non-gaming products.
Non-gaming diversification is key for Macau’s operators as they vie for gaming tables for their new Cotai properties and as they fend off potential threats to gaming concession renewals in 2020 and 2022.
Edward Tracy was named Macau Daily Times Person of the Year 2013.