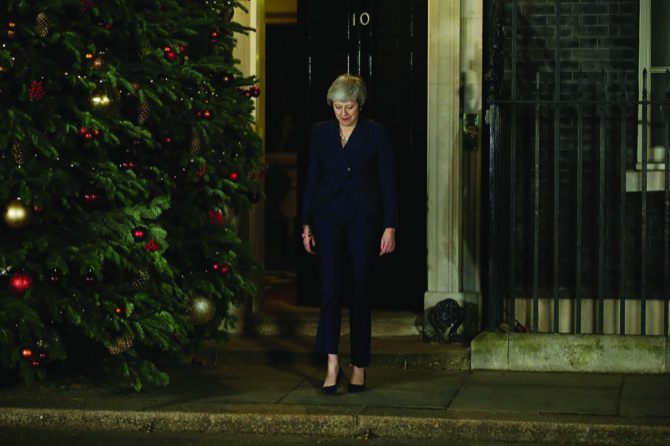 British Prime Minister Theresa May is seeking a lifeline from European Union leaders today [Macau time] after winning a no-confidence vote among her own Conservative lawmakers.

May will ask the other 27 EU leaders at a summit in Brussels for reassurances about the deal that she can use to win over a skeptical British Parliament, particularly those within her party who triggered the no-confidence vote in the first place.

Earlier this week, to great uproar in Parliament, May scrapped a planned vote on the deal this week when it became clear she would lose.

The bloc is adamant there can be no substantive changes to the legally-binding withdrawal agreement but have suggested that there could be some “clarifications.”

Earlier, May survived a vote on her leadership from Conservative lawmakers by 200-117. The victory gives her a reprieve in that her own party can’t have a confidence in her leadership for another year, but the size of the rebellion underscores the unpopularity of her Brexit plan.

The vote confirms May’s reputation as a dogged, determined political survivor. But now comes the more formidable task — seeking changes to the withdrawal agreement that can win support in Britain’s Parliament.

May’s Brexit Secretary, Stephen Barclay, told the BBC that there were signs of “positive” movement from the EU on the one issue that has proved the most intractable — the provisions designed to prevent the re-implementation of physical border controls between Northern Ireland, which is part of the U.K., and the Republic of Ireland, a member of the EU.

Under this so-called “backstop,” the U.K. would remain part of the EU customs union if the two sides couldn’t agree on another way to avoid a “hard border.” Lawmakers from all sides of the political spectrum don’t like the backstop because the U.K. couldn’t leave the arrangement without the EU’s consent.

“There is movement, but the question is how do we ensure that that movement is sufficient for colleagues?” he said. “But colleagues also need to focus on the fact that alternative deals also need a backstop.”

Re-opening the negotiations to address the border problem also raises the risk that May could lose concessions on other parts of the deal, Barclay said.

Among EU leaders there is sympathy for May’s predicament — but also exasperation at Britain’s political mess.

Germany’s main business lobby group says it’s up to the British government “not to waste any more time” and to secure an orderly exit from the European Union.

The Federation of German Industries placed responsibility for avoiding a no-deal Brexit squarely on London.

“We appeal to those responsible in London to organize a majority to avert a hard Brexit as soon as possible,” the group’s director general, Joachim Lang, said. “Otherwise companies will have to press ahead with implementing the necessary emergency measures for a disorderly withdrawal of the United Kingdom from the EU.” AP