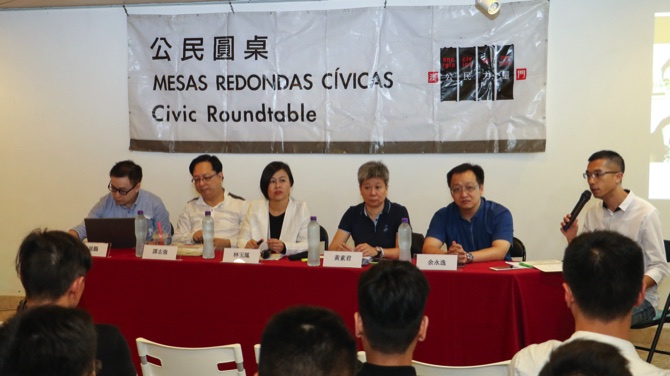 Agnes Lam (third from left) and other participants in the debate

A roundtable debate, organized by Macao Civic Power (MCP), was held yesterday afternoon at the Portuguese Bookshop with the purpose of discussing the topic of democratic systems and elections.

Special focus was placed on the reasons behind the results of the recently held US elections and its potential implications for Macau.

The decision of the British citizens to leave the European Union (EU), known as “Brexit”, was another catalyst of discussion, a point that one of the core members of the organization, Agnes Lam, noted, “[the US elections and Brexit] are not really in discussion, we just use them as a starting point to discuss the issue in Macau.”

According to Lam, the issue of the participation of eligible voters is important common ground between the US elections, the Brexit and the Macau elections for the Legislative Assembly (AL).

“If you look at the US presidential elections and also Brexit you find that [in both cases] there is only one quarter of the people that vote,” she said, remarking that this also happened in the case of the recent election of Donald Trump.

In the US election, voter turnout was around 126 million votes already counted, which means about 55 percent of voting age citizens casted ballots this year. Many adult citizens of the US cannot vote because they are not registered or because they are ineligible due to legal reasons.

Lam also said that there is the potential for the cases mentioned to replicate in the region in the AL elections. “If you look at the case in Macau [the demographic] is more or less the same. We have only half of the population that are registered voters and only half of those actually vote,” Lam mentioned as evidence of the pattern she was highlighting between the several elections.

Lam’s wish was to use the debate to call the local population’s attention to the voting pattern and to share her belief that a system cannot be truly democratic when the people under its care do not participate.

The scholar also reaffirmed that there are a lot of lessons to take from these elections and encouraged reflection on whether the system is really working and if the politicians in Macau are able to motivate enough people to vote.

Not wanting to announce if she is planning to run for the upcoming AL elections, Lam highlighted that the core of these discussions is to “tell people that they have the chance to change society through this simple system.”

Among the five academics who also participated in the discussion panel, where Macau and Hong Kong examples were also addressed, was professor and Cross-strait Relations Commentator, Camões Tam.

Tam affirmed that he was “the only commentator in Hong Kong and Macau to predict Donald Trump’s election” and therefore he was not surprised by the results, claiming that the results achieved have to do with the “dissatisfaction of people living in the central and southern areas of the USA that are poorer than the East or West Coast areas.” He continued, saying that, “these people are mostly countrymen [that have] seen their life affected by large scale immigration and other factors that reduced their life quality and status.”

Tam also remarked that the votes for Trump are due to the fact that “the right-wing section of US people is falling down very quick and there is no other political party that protects their interests,” noting that the democrats have traditionally been the faction that supports minority interests while the Republicans only protect the interests of the tycoons, wealthiest groups and Wall Street establishment people,” he said, remarking that this was a “fight back” against the establishment in place for the last few years.

MCP representatives said that through these kinds of initiatives, they aim to arouse public interest in political discussion and inspire civil participation in order to review and construct social values for the entire civil society.