The Chief Executive (CE), Chui Sai On, will lead a delegation from Macau to visit the cities of Nanjing and Changzhou in Jiangsu Province on March 29 and 30, the Government Spokesperson’s Office announced. The CE and his delegation will visit the region’s industrial park,  assist with the inauguration ceremony, and sign an agreement for the creation of a new park that will be co-developed by Jiangsu and Macau. The delegation will visit the Jiangling industrial park in the City of Nanjing and the Taihu industrial technology park in Changzhou City. They will additionally meet with the leaders of Jiangsu Province. 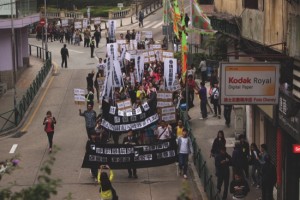 Forefront of Macau Gaming to demonstrate on May 1

Forefront of Macau Gaming, an association that represents  the interests of casino dealers, is losing momentum. Without a headquarters and with the current crisis in the gaming sector, the group says that the upcoming Labor Day demonstrations will test its ability to mobilize people to its cause.

Macau-based casino services firm Macau Legend Development Ltd has signed a letter of intent to sell its Landmark Macau casino hotel, GGR Asia reported yesterday. The buyer, according to a Wednesday filing to the Hong Kong Stock Exchange, has been identified as “Li C.K.”, “a substantial shareholder” and “a person connected to the company.” A report from the Hong Kong Economic Journal identified the buyer as Li Chi Keung. An individual by that name has been described in the firm’s 2015 interim report as having a stake of approximately 12 percent in Macau Legend. The casino at Landmark Macau, named Pharaoh’s Palace Casino, operates under the casino license SJM Holdings Ltd.

According to an Executive Order published in the Official Gazette, the new immigration checkpoint that will be installed at the Macau Fisherman’s Wharf is exclusively for “people entering or leaving the territory in leisure crafts.” The new checkpoint at the Marina of the Fisherman’s Wharf will operate “as needed,” according to the CE order published in the Official Gazette. It will commence operations on April 1.