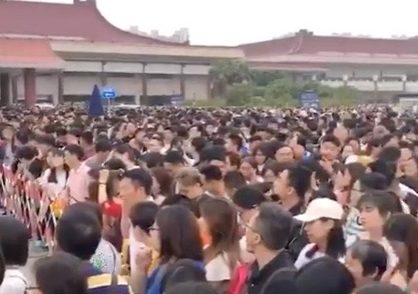 A total of 183,323 tourists arrived in Macau on Labor Day alone, an increase of almost 77% compared with last year. It is worth noting, however, that Labor Day last year was the end of the four-day holiday in mainland China, unlike this year, which was the first day. The border gate again topped the list of the most populous checkpoints, as it alone recorded 234,945 arrivals. Social media images showed long queues outside the Gongbei border building in mainland China. People claimed to have waited for four hours before successfully crossing both checkpoints.

The People’s Liberation Army’s camp in Macau was open to the public for three consecutive days. On the second day, May 1, it attracted more than 3,000 visitors, more than 10,000 visitors got the chance to see the camp over the three days. Numerous presentations were prepared, such as a counter-terror drill, as well as showcases of explosions and smoke tactics. Many were waiting for hours before the doors opened. Yesterday was the last day for public visits, which was especially for students and associations.

The government is extensively relying on the rental of offices for public use, lawmaker Ella Lei pointed out in a written inquiry. The government budget for this year reserved nearly MOP1 billion to pay these bills. Even though the government has pledged to gradually move offices to self-owned premises, the soon-to-be-opened public office building will only save MOP21 million in rental, while the other buildings will only be finished in 2021 at the earliest. In the written inquiry, Lei asks the government if it can further rely on automatic services and less expensive premises, as well as requesting self-governing bodies to abide by the same government regulations governing rental budgeting.