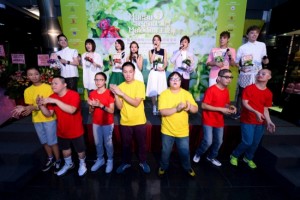 The charity music album “Macau Original Melodies Vol.2” (MOM Vol. 2) has been launched by a group of local singers, including David Chan, Anabela Ieong, Fanny Cheong, Hyper Lo, Cherry Ho, Phineas Cheong, AJ, Josie Ho and Jose Rodrigues. Last year, “MOM Vol. 1” raised MOP108,000 for the Macau Deaf Association. This year, the nine singers will donate all of the proceeds to the Association of Parents of the People with Intellectual Disabilities of Macau.

A group of Filipino migrant workers initiated a cleanup campaign yesterday on Hac Sa beach, Coloane. The promoters say that the event is aimed at contributing to the local community’s efforts in ensuring environmental protection. “There is a lot of rubbish, especially in the A-Ma temple behind the statue – they made it a garbage area. Hac Sa is not so dirty. A-Ma temple is more dirty than this place,” Elsaud Labro, president of Greens Macau Partido Kalikasan-OFW, told TDM.