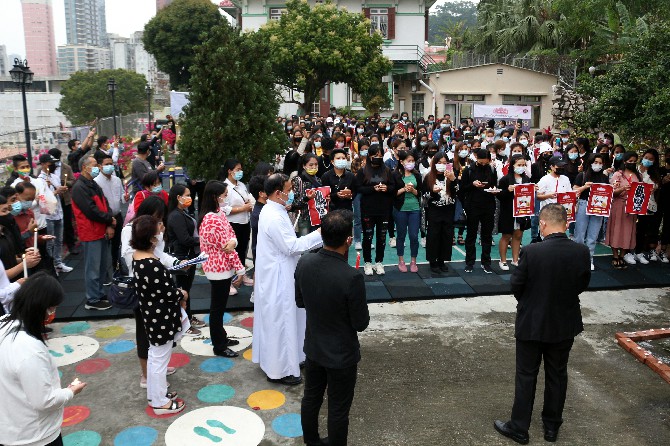 A large group of Myanmar nationals in Macau have held a candlelight vigil to mourn the victims of the military coup on-going in their home country.
According to the organizers, the Myanmar Social Club of Macau, a group of more than 300 Burmese participated in the vigil paying tribute to those who have lost their lives over the last month as a result of confrontations between the citizens and the military forces, which took control of the country by force last February 1.
To the Times, two of the participants in the vigil shared their views and personal experiences about the current events in their home country.
Han Zaw, a first-year student at the University of Saint Joseph (USJ) said, “We are here to commemorate the fallen brothers and sisters that gave up their lives in the fight with the military [forces] and also [in] their quest for democracy,” he said, adding, “We are deeply saddened by this devastating tragedy.”
According to Zaw, the people of Myanmar are in shock, as the military coup happened unpredictably, representing a big step back on the democratic path of the country that has seen, in the last decade, the first democratically-elected government in a long time.
Questioned as to how he is living and feeling the events in Myanmar from Macau, Zaw said, “I feel great pain for all that is happening and also for the fact I am not able to be present in person. I feel [somewhat powerless] and irresponsible for being here and not being there together with my people. Over 50 people have already lost their lives.”
Luis Yureh, also a student in Macau, added that the reports he has been receiving from family and friends in Myanmar are different according to the various areas of the country.
“In the countryside, people are less educated and they do not experience so much of the situation [military coup]. In the [big] cities, things are different and there are protests staged everywhere with people following the civil disobedience movement (CDM) in which they are not going to work or to the office, or even to schools, and they gather to protest against the government takeover,” Yureh said, adding that the ones leading the protests and calling for the restoration of a legitimate government are mostly the younger generations.
Questioned by the Times as to whether vigils like the one done in Macau and that are happening also in other countries and regions by the Burmese abroad can help with the process of restoring the country’s normalcy, Yureh, said, “We hope that [with such events] we can help to pass the message and alert the world [international authorities] for what is happening in Myanmar. I hope that what we are doing can work as a useful method to put pressure [on the military].” 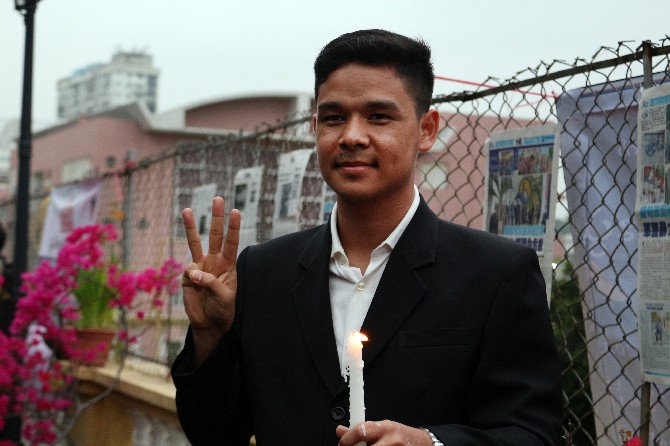 To gather in public space ‘would be better’
Questioned as to the fact that the Macau police force has disallowed public demonstrations from the Burmese, claiming that only residents of Macau were entitled to do so by law, Zaw said, “If it was possible and if we were allowed, it would be better if could gather in a public space and have more people and [more] visibility. But we also can do it in a private space like we are doing here and we still can do it. That’s the most important.”
The candlelight vigil took place at the Sisters of the Good Sheperd shelter facility, located at Estrada da Vitória in the peninsula.
During the vigil, participants gathered for prayers conducted according to the rituals of several belief systems, namely Catholic and Buddhist.
Participants also held posters expressing support for the Committee Representing Pyidaungsu Hluttaw (CRPH), a group of elected Myanmar lawmakers who were prevented from taking their seats in Parliament by last month’s coup as well as messages calling for the “Rejection of the Dictatorship.”
In the surroundings of the venue where the vigil took place, the Times observed several groups of police officers from the Public Security Police Force standing in streets leading to the venue.
Some elements of the police, wearing plain clothes, could also be seen in the same area. While entering or exiting the Sisters of the Good Sheperd shelter venue, several of the participants in the vigil were requested to present their identification to the officers, who took note of their names and non-resident work permits (blue cards).

Group of residents delivered a notice for a demonstration on Wednesday

A group of local residents last Friday delivered a notice to the Public Security Police Force (PSP) relating to their hosting of a demonstration related to the situation in Myanmar.
According to the group, the notice is related to a gathering to be hosted on Wednesday (March 10) at the Rotunda Carlos da Maia, commonly known as “three lamps,” in central Macau.
The notice was signed and delivered by Wu Shao Hong, a known political activist and one of the leaders of the Association of Macau Activism for Democracy, which unsuccessfully ran in 2017 for a seat in the Legislative Assembly elections.
Speaking to the media while exiting the PSP facilities, Wu admitted that there is a high possibility of the gathering being disallowed by the police. In that case, he admitted that the alternative is to host an “online event.”