Cage (not) leaving Macau: ‘I would love to shoot here!’ 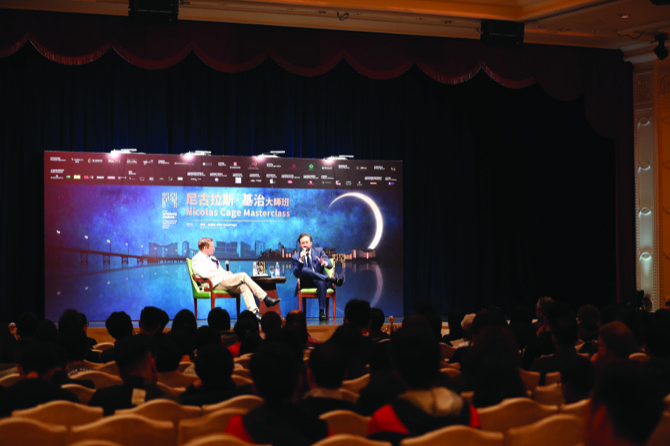 It was right after his masterclass on Sunday that we were able to “flash” interview Nicolas Cage.

He looked to Marlon Brando and James Dean for inspiration, just as he looked to Elvis and Andy Warhol. He wanted to break rules, combine all these actors or artforms and create something new for himself, “moving away from naturalism to a sort of art-synchronism.”

“I could very easily [have gotten] fired for doing that,” he teased.

Instead, David Lynch and the Coen Brothers welcomed his wild performances. Mickey Rourke, at a point, “was [his] mentor,” long after his father introduced him to the classics and horror movies played at home “with a very old film projector.”

The most difficult character Nicolas Cage ever had to perform was that of a man who drank to his death in Las Vegas after enduring a divorce and losing his job in Los Angeles. Cage told the audience in a ballroom at Wynn Macau how he got inspiration from famous “drunks” of the silver screen: Jack Lemmon (“Days of Wine and Roses”), Dudley Moore (“Arthur”), and, mostly, Albert Finney (“Under the Volcano”). “That guy [Finney’s character] is REALLY drunk!” he laughed.

“Luckily [“Leaving Las Vegas”] was shot in six weeks; I couldn’t bear it if it were six months.”

“The film was being rejected at first. It was too dark for Hollywood,” he recalled studio managers’ reaction to the script. Eventually, it was made by a big studio and Hollywood applauded Cage’s deadly performance, giving him the Oscar for Best Actor.

International Film Festival and Awards Macao (IFFAM)’s most talented ambassador was about to leave Macau when we met briefly, with a promise to return. He likes it here and finds the place extremely cinematic.

Macau Daily Times – It is not the first time you have come to Macau, and you seem to like it here. Why did you accept the role of Talent Ambassador for IFFAM2018?

Nicolas Cage – I do like it here! I accepted the invitation to be the Talent Ambassador as it’s an exciting opportunity to meet other people who are as enthusiastic about international cinema as I am.

MDT – What are your expectations of the festival and your participation in it?

NC – My expectation is for festivalgoers to enjoy a really marvelous lineup of movies that are the best in the industry so far, as well as exploring emerging new talent. I hope my participation in the festival helps raise awareness of the class and seriousness of IFFAM as it expands its worldwide reach.

MDT – You are probably the best-known Hollywood actor in China and Asia. What in your filmography do you think appeals to these audiences?

NC – I think much of my success in this region is down to working with Chinese and other Asian filmmakers like John Woo and the Pang Brothers. I have been coming here for many years and have developed a great relationship with the people of China and I hope that will continue for a long time.

MDT – Your latest movie “Mandy” (premiered) here at the festival. What is your take on the film?

NC – I think the film is a unique experience made by a visionary filmmaker in Panos Cosmatos – it is an intense visionary nightmare.

MDT – Do you find Macau, its ambiance and history, attractive for a Hollywood production? Would you like to shoot here?

NC – I would love to shoot in Macau! It’s the wonderful confluence of the Chinese and Portuguese cultures that makes for the perfect place to shoot a film. The combination of the architecture, the food, and the people is fantastic. Especially the people – they are just warm and welcoming. I would not hesitate to come back.