California, China to team up on climate research institute 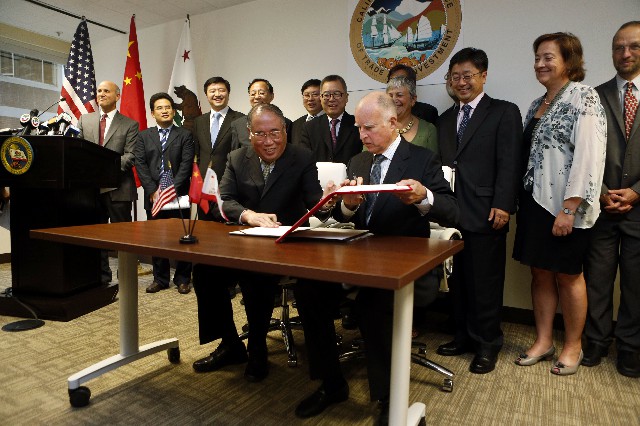 As tensions between China and the United States ratchet up, former California Gov. Jerry Brown sees a way to bring together the world’s largest carbon emitter and a U.S. state that’s leading the way in energy standards: climate change.
Brown and Xie Zhenhua, China’s top climate official, announced a new university partnership focused on climate research and policy as part of the United Nations Climate Action Summit in New York.
While it may seem like an unlikely pairing, Brown has been building a partnership with China for years. And China, which emits the most carbon of any nation, has been investing aggressively in renewable energy products such as battery storage technology and reducing its reliance on coal.
California, meanwhile, has adopted some of the nation’s most aggressive climate goals, including an effort to use 100% clean energy for electricity by 2045.
The partnership comes amid Republican President Donald Trump’s hostile relationship with China and his withdrawal of the United States from global commitments to combat rising temperatures. Trump only briefly stopped by the climate summit before going to an event on religious freedom.
“Our goal is to keep an open door of constructive conversation at the very moment when doors are closing,” Brown, a Democrat who left office in 2018, told The Associated Press in a recent interview.
Zhenhua will be in New York for the announcement while Brown planned to participate in discussions remotely from California.
California under Brown and now Gov. Gavin Newsom, a fellow Democrat, has sued the Trump administration repeatedly over its rollback of environmental and clean air regulations. Brown began developing partnerships with China on climate during his governorship with trips to the Asian nation in 2013 and 2017.
The California-China Climate Institute will be housed at the University of California, Berkeley and work in partnership with Tsinghua University in Beijing.
While China is prioritizing fighting global warming at home, it’s also investing in dirtier energy methods such as coal in other countries as it looks to expand its global influence through its “Belt and Road” infrastructure initiative.
Still, Brown said California shouldn’t shy away from opportunities to work with China, saying a research partnership will be beneficial to both. China, for example, could teach California more about its research on battery storage, Brown said.
“One thing I think is important and still available for further development is our climate partnership,” Brown said. “That’s something Trump can’t do because he has sworn climate denial and therefore he is AWOL on one of the most important challenges facing world leaders.”
Brown noted both California and China are focused on tightening emissions of pollutants from cars and trucks. The Trump administration last week revoked California’s decades-old ability to set its own standards, but California is punching back.
“They know it’s the future and they also know the biggest market in the world will be following similar and increasingly more difficult emissions standards,” Brown said, speaking of China. “For Trump to attempt to create an island of gas-guzzling inefficiency in a sea of increasingly efficient zero-emission cars is insanity.”
Alice Hill, a senior fellow for climate change policy at the Council on Foreign Relations, said China has led in finding new ways to deal with the challenges from climate change-related floods. She called China an “important partner” for the United States on climate change even amid concerns about intellectual property theft by China.
“You have to walk into this with open eyes but that does not mean you may not have a relationship,” Hill said.
The institute will invest in research on zero-emission vehicles and low-carbon transportation, carbon pricing, climate adaptation, sustainable land use and agriculture, carbon capture and storage and long-term climate policy enforcement. Through the partnership, California and China will share best practices on how to scale innovative climate solutions. It will also train researchers and scientists from both places and host a series of “subnational climate dialogues” with business, government and climate leaders in the United States and China.
The two nations held a similar discussion at the Global Climate Action Summit that Brown hosted last year in San Francisco.
China’s national and provincial governments as well as California’s public utilities commission, air resources board and other key climate decision makers will work with the institute.
Asked if it was problematic for a state to team up with a foreign country, Brown said “we’re not negotiating any treaties, we’re not making foreign policy, we’re working on climate policy, global climate policy, and as free people we are able to do that.”
Former Vice President Al Gore and Washington Gov. Jay Inslee, who have been vocal proponents of tackling climate change, are expected at the announcement. Inslee, who recently ended his bid for the Democratic nomination for president, teamed up with Brown on some climate efforts while Brown was governor. KATHLEEN RONAYNE, SACRAMENTO, AP