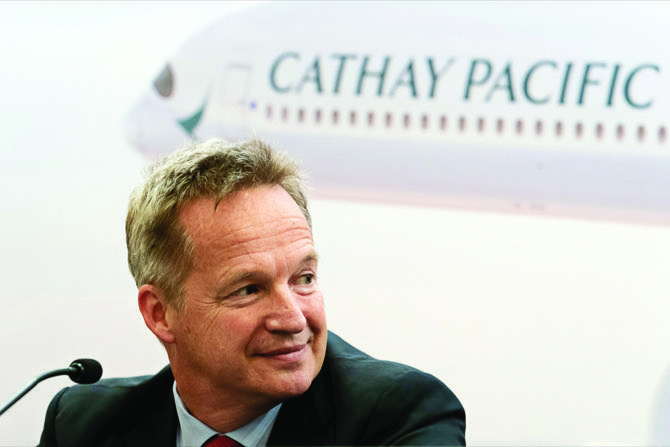 Cathay Pacific Airways Ltd. agreed to pay HKD2.25 billion (USD287 million) in cash for Hong Kong’s only budget airline to enter the no-frills market, after more than a decade resisting such a move to focus on premium services.

Cathay plans to operate Hong Kong Express Airways Ltd., part of HNA Group Co., as a standalone carrier after the transaction is completed by Dec. 31, the flag carrier said.

“HK Express captures a unique market segment,” Cathay said in an emailed statement Wednesday. “This represents an attractive and practical way for the Cathay Group to support the long-term development and growth of our aviation business and to enhance the competitiveness of the Hong Kong hub during a time of intense regional competition.”

The acquisition will give Cathay a crucial piece of business that’s missing from its operations and additional landing slots in Hong Kong, home to Asia’s busiest international airport. It will provide Cathay with a new revenue source as the region’s growing economies allow more people to fly, and as Chinese rivals expand with direct long-haul flights, bypassing the need to transit in Hong Kong.

The company will use its existing funds for the cash payment. As part of the transaction, Cathay also pledged to repay HKD2.68 billion of debt held by Hong Kong Express in the form of promissory notes.

Cathay is more than a decade behind Asian arch rival Singapore Airlines Ltd. in entering the no- frills business, and has seen demand for some shorter routes eroded by low-cost airlines while Chinese and Middle Eastern carriers chip away at premium and long-haul demand.

As airlines from Australia to India acknowledged the travel aspirations of Asia’s rising middle class by setting up budget carriers including Jetstar, Peach Aviation and IndiGo, Cathay sat tight on its premium roots. Profits were further eroded as mainland carriers began offering cheaper, direct flights to the U.S. from Chinese cities including Shanghai and Guangzhou, reducing the need to fly via Hong Kong.

In March 2017, Cathay reported the first annual net loss in eight years and said it was embarking on a three-year transformation program to improve its operational efficiency and returns.

In April that year, it named a new chief executive officer, Rupert Hogg, who said a few months later that Cathay “broadly” had no plan to begin a low-cost carrier. Less than a year later, Cathay’s parent, Swire Pacific Ltd., named Merlin Swire as chairman, marking the return of a Swire family member to lead the conglomerate.

The overhaul amid the management changes appears to be bearing fruit. After cutting at least 600 jobs, adding destinations, and improving services, the carrier ended a two-year run of losses and posted its first full-year profit in 2018.

Apart from Hong Kong Express, airlines looking to start frills-free operations in the city have been met with opposition. In 2015, Hong Kong rejected an application from Jetstar Hong Kong Airways Ltd., saying it didn’t comply with legal requirements to operate such a business. Cathay also voiced its objection to the budget airline – a venture of Qantas Airways Ltd. and China Eastern Airlines Corp. that was backed by billionaire Stanley Ho’s Shun Tak Holdings Ltd.

Hong Kong’s position as an aviation hub has been threatened in recent years as airports in the mainland have been expanding to handle more international passengers, while Chinese carriers are either adding direct routes to the U.S. and Europe or teaming up with U.S. peers to expand their networks. Delta Air Lines Inc. took a minority stake in China Eastern in 2015 and American Airlines Group Inc. announced a similar deal with China Southern Airlines Co. in 2017.

For Chinese conglomerate HNA Group, the disposal is part of its efforts to trim one of China’s biggest debt piles by selling dozens of assets from hotels to aircraft-leasing and inflight-catering businesses.

Hong Kong Express, which started services in October 2013, operates a fleet of Airbus SE A320 family aircraft. It flies to cities in countries including China, South Korea, Japan and Vietnam. Kyunghee Park, Bloomberg