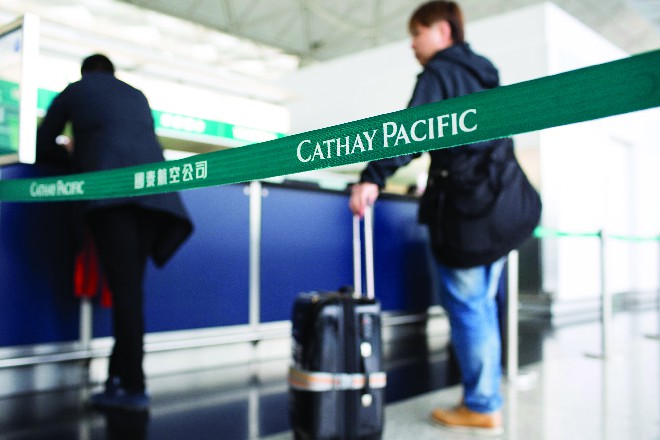 Cathay Pacific Airways Ltd. shares extended their double-digit rally after a Chinese state-run newspaper tweeted that Hong Kong’s airport may restart transfer flights to mainland China, a move that could inject the beleaguered carrier with some much-needed travelers.
Cathay climbed more than 13%, its biggest intraday gain in two months, as the Global Times said on Twitter that the transfer flights “could soon resume.” The newspaper cited a source it didn’t identify. Cathay typically relies on mainland traffic for a large portion of revenue, and the tweet came after the carrier reported a record loss and warned of more gloom ahead.
Airline stocks globally already were outperforming on signs of a pickup in traffic in parts of the world, a gradual reopening of some borders and renewed hopes for a vaccine.
The stock-market enthusiasm contrasted with Cathay’s announcement during the lunchtime trading break that it suffered a first-half net loss of HKD9.9 billion ($1.3 billion) as the coronavirus pandemic brought global travel to a near standstill. The carrier said it doesn’t expect any meaningful recovery in business for some time. That news was already priced in, however, given that Cathay had warned about the loss last month.
In a statement Wednesday, Chairman Patrick Healy said the airline and its Cathay Dragon unit flew only 4.4 million passengers in the first six months, down from 18.3 million a year earlier. Passenger revenue tumbled 72% to HKD10.4 billion during the period. It flew an average of just 500 passengers a day in April and May.
“The global health crisis has decimated the travel industry and the future remains highly uncertain, with most analysts suggesting that it will take years to recover to pre-crisis levels,” Healy said.
Covid-19 struck just as Cathay was trying to rebuild following protests in Hong Kong that led to changes in senior management and a sharp drop in traffic last year.
The pandemic made matters much more grave for Cathay and airlines in the U.S. and elsewhere, many of which are relying on government aid to survive. Unlike most airlines, Cathay has no domestic market to fall back on.
Cathay took several steps to reduce costs, including cutting salaries, introducing unpaid leave programs for staff and closing crew bases in the U.S. The airline also agreed with Airbus SE to defer deliveries of A350s and A321neos to as far as 2025, while it is in “advanced negotiations” with Boeing Co. for the deferral of B777-9 widebodies.
The outlook remains extremely challenging as the virus spreads, with confirmed infections topping 20 million this week. The International Air Transport Association doesn’t expect the global airline industry to recover to pre-virus levels before 2024. MDT/Bloomberg