CE assures fulfillment of public housing in reclamation zone A 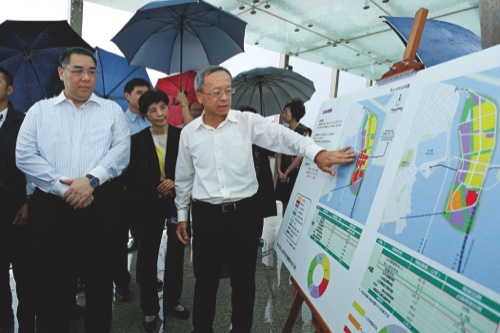 The scheduled public consultations on the highly expected reclamation zone A will not be affected by the change of government, and the reclamation will be completed on schedule, assured Chief Executive (CE) Chui Sai On.
“Having understood the importance of developing reclamation zone A – especially for the planning of public housing within the zone – the government will definitely fulfill the project and respond to resident’s demands on public housing,” he stressed to the media on the sidelines of yesterday’s “Walk for A Million” charity event.
A delay has occurred in the project, initially scheduled to be finished in November 2015. Chui responded that the work is ongoing and the general contractor promised not to add more expense.
“The project is essential to Macau’s sustainable development; the government values the opinions collected from the public consultations, so as to build the Zone A properly,” he added.
Chui further stated that the future reclaimed zone A will take reference from their experience of planning the Seac Pai Van public housing complex, especially for the establishment of supporting facilities in aspects of commerce, transportation and environmental protection.
The CE was also asked about his plan to streamline the administration team, whilst the government prepares to recruit 2,200 more civil servants next year.
In response, he reaffirmed that in the next five years, the new government will control the total number of civil servants, and the budget shouldn’t see a substantial increase.
“However, for some important public services that need to add more manpower in fields, such as in healthcare and security, we must think of the recruitment from a realistic point of view,” he said, adding that the specific number of civil servants as well as the overall allocation of budget will be revealed next March in the new government’s Policy Address.