CE claims that infections came from a strain common in UK, US 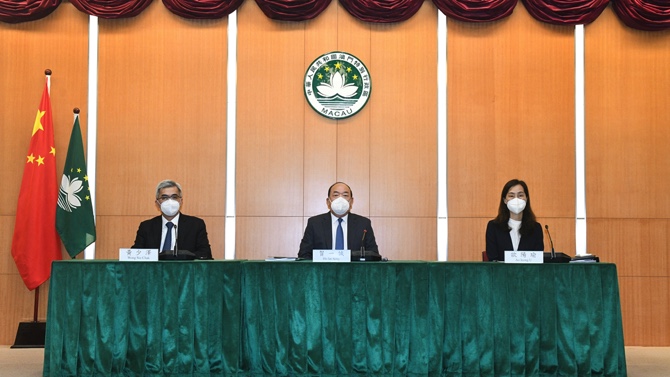 The recent local outbreak of Covid-19 may be a strain of the virus coming from abroad, the Chief Executive (CE) Ho Iat Seng said yesterday during a special press conference organized by the government to announce the latest pandemic measures and updates.

According to the CE, the recent cases, amounting to 110 at the time of the press conference, were identified as the BA5.1 strain of the Omicron variant. This strain, Ho said, is not common in China but is common in the U.S. and the U.K.

“We have found that the strain we have in Macau is the Omicron BA5.1. In China, this is not a common strain but […] it’s more common in the United States of America and the United Kingdom. This means that the search for the source of this outbreak is far more complex and difficult,” the CE said. He added that this strain is very quick to cause infection and can spread easily, but it is also known to cause less significant symptoms and complications, and is easier to recover from.

“It has a high transmissibility but, in terms of the threat to human lives, is not as serious as other strains, so the population can remain relatively more relaxed,” Ho said. The CE added that the government’s measures in enforcing mandatory closures of several types of businesses have to do with the high transmissibility of the virus and were enacted in a bid to prioritize the safety of the people.

According to official information published by the Beijing medical journal “China CDC (Center for Disease Control) Weekly,” the first case of the Omicron variant BA5.1 in China was reported on May 13 this year in Shanghai.

An epidemiological investigation traced the virus to a flight arriving in the Chinese city from Amsterdam on April 27.

The viral strain was detected in a 37-year-old Chinese passenger who had previously been in Uganda and had also had a transit in Seoul days before.

The virus was detected during the quarantine period on April 29 and, after treatment, the patient was discharged on May 12.

According to the same official source, several infections with the same strain have been found, with links to South Africa, Germany, Belgium and Hong Kong.

While suggesting that the outbreak’s origin might not be related to the mainland, the CE stressed that authorities are keen to find the outbreak’s source as well as any cases that might be hidden in the community.

“We are not [waiting] with our arms crossed. Quite the opposite, we are trying to find the source as fast as we can. Maybe it came from the cold chain, but we also don’t know that for sure. But [the source being] China is not that plausible because it is not a strain that is common in China,” Ho said.

Nonetheless, in response to several inquiries from the media, he also said that it was too early for any explanation to be ruled out.

“The strain is more common in [the U.K. and U.S.] than in China but I have not discarded any possibilities yet. It could be anything at this point. We need to continue to search to ensure [we find] the origin,” Ho said, adding, “according to China’s experience, it might also come through the mail or parcel shipping, so until we find the real cause we cannot discard any possibility.”

One potential source already ruled out is the 16-year-old resident who recently returned from abroad. According to media sources, this resident is one of the people infected with the virus, which was discovered just two days after he concluded his quarantine period.

According to the CE and Secretary for Social Affairs and Culture Elsie Ao Ieong, given the timeline, it is not possible that this teenager is the source of the outbreak since there is evidence that this strain is detectable just a few days after infection. Additionally, the first person was reportedly infected on or around June 16, at which time the youngster was still undergoing medical observation.

According to Ao Ieong, the incubation period for this strain of the virus is between two and three days. This, she says, justifies the high frequency of nucleic acid tests (NAT) and rapid antigen tests (RAT) requested by authorities as well as the short time between the two rounds of citywide mass testing.

“This is why we decided to continue to test. It is possible that from one day to another a person that tested negative can turn positive and our goal is tracing back these cases immediately before there is spread,” Ao Ieong said. She added that, on Wednesday, authorities “found 15 cases using the NAT for specific groups and another 26 using the RAT. We need to continue to test to stop this chain of transmission.”

In positive news, the same official noted that, in the cases being detected, there is a high CT (cycle threshold) value, which indicates that all these people are in the early stage of the infection. This is “good news,” according to Ao Ieong, for preventing wider spread.

In response to a media inquiry on how an outbreak could possibly have originated from frozen food products, the CE explained that it is impossible for authorities to test every package of imported goods.

He explained that current practice is the collection of regular samples from arriving goods to minimize risk, but there is always a possibility of transmission through the cold chain, mail, parcels or luggage arriving in Macau from a returnee or any other situation that is somehow missed by disinfection procedures.