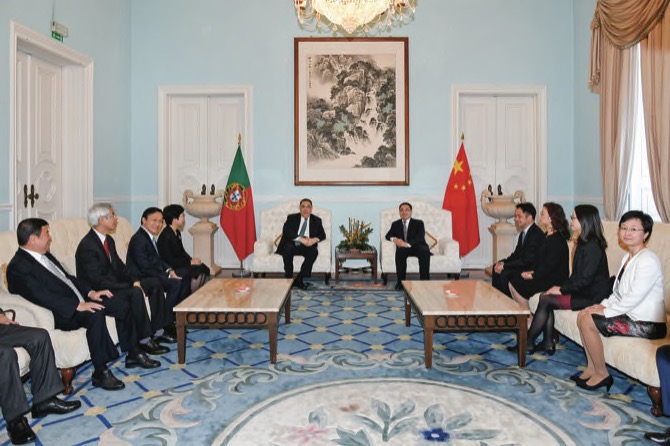 Currently on his third day of an official visit to Portugal, Chief Executive (CE) Chui Sai On, leading a Macau delegation, met with several authorities in the country, starting with the Ambassador of the People’s Republic of China in Lisbon, Cai Run.

During this meeting, Chui and Cai exchanged views on how to boost Portuguese-Chinese relations and strengthen Macau’s role as a platform for cooperation between China and Portuguese-speaking countries.

The CE praised the work carried out by Portugal on the entrepreneurship of its young people, noting that the Macau delegation intends to observe and learn about these initiatives, as well as to strengthen exchange in this area, an official statement from the Government Information Bureau noted.

At the meeting, Chui thanked the Chinese authorities for their support in strengthening bilateral ties with Portugal, especially on a year full of celebrations between the three parties.
In early May, during his visit to Macau, the President of the Portuguese Republic, Marcelo Rebelo de Sousa, expressed his focus on the development of Portuguese culture and Portuguese language learning in Macau. He also voiced his intention to support the participation of the Portuguese-speaking countries, namely Portugal, in supporting Macau’s construction of the “Belt and Road” initiative and the implementation of the “General Planning Guidelines for the Development of Greater Guangdong-Hong Kong-Macau Bay (GBA).” These topics are once more in discussion across the CE’s visit to Portugal.

Ambassador Cai Run recalled the recent visits from both the President Xi Jinping and the President of the Portuguese Republic to each other’s countries as a display of this “high-level bilateral relationship,” noting that Portugal pays great importance to several areas of construction within the GBA which not only offers new opportunities of cooperation between Macau and Portugal but also contributes to the development of local economic diversification.

Cai identified several projects in recent years where Macau companies and the Macau government created partnerships with Portuguese entities, creating delegations and branches. In the ambassador’s opinion, this demonstrates Macau’s role in linking China and the lusophone world.