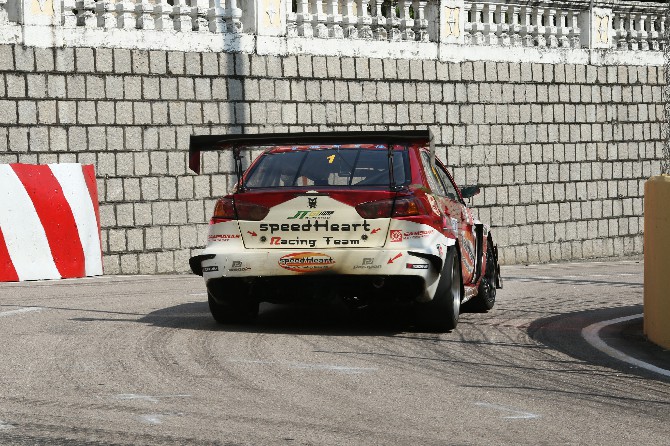 Wong Wan Long repeated his success in last year’s Macau Touring Car Cup category by winning the renamed Macau Challenge Cup this year.
With a dominant performance over the whole weekend, the Mitsubishi Lancer Evolution 10 driver was the fastest on the track since Friday’s Free Practice 2 session.
Wong took this success into the qualifiers, taking pole position in Saturday’s Race 1 and winning comfortably, repeating the same in Sunday’s 12-lap race.
As in the eight-lap race on Saturday, Wong was joined on Sunday’s podium by two Mitsubishi Lancer Evolution 9 drivers, Summer Chan and Delfim Choi who then swapped positions for Race 2, with Choi climbing to second place.
In an undramatic race, and with drivers happy with their positions after Choi’s recovery, Wong ran a lights-to-flag race without his dominance ever put in question by any of the other drivers.
Unusually for this category, in which incidents and crashes are commonplace, the race ran at a normal pace and without any significant interruptions on the course.
Noteworthy, however, was the misfortune of Jerónimo Badaraco. While in eighth place and trying to climb the ladder, he went straight into the run-out area at the Hairpin. His car caught fire, potentially ignited by his brakes, and it was only his quick reaction that averted major consequences, with firefighters on site responding slowly, seemingly stunned by the events.