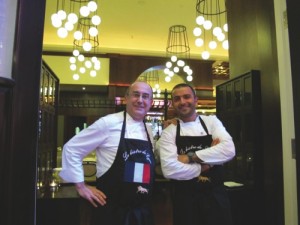 French chef Bertrand Esnault has joined his former protégé Elie Khalife at MGM’s Aux Beaux Arts restaurant to celebrate true Lyonnaise cuisine. Until Sunday, both chefs will be creating a menu full of traditional dishes from the Lyon region, using familiar ingredients.
“We tried to choose familiar ingredients, like chicken and beef; ingredients that people here know, rather than liver, kidney… However, we added veal liver to the menu, which is very good,” said chef Bertrand Esnault, who cooked alongside chef Elie Khalife last Thursday to present local media with a sample of the upcoming menu.
Starting off with a baked chicken liver custard appetizer as well as warm sausage baked in brioche, the Lyon-inspired menu includes braised chicken with crayfish, Saint Marcelin cheese, fried bugnes, and Beaujolaise poached pear, amongst other delicacies.
“Le Vrai Lyon” (Real Lyon) menu is also inspired by the “Biennial of the Lions,” an exhibition currently on display at MGM Macau.
Bertrand Esnault is a chef and culinary professor at the prestigious French Institute Paul Bocuse. A true lover of French cuisine who has worked in several Michelin-
starred restaurants, Esnault says that one should be proud of being a cook before being a chef.
The menu he prepared for Aux Beaux Arts is quite big, he said, although it only provides a glimpse of what the Lyon region has to offer in terms of food. The dishes on show are not only inspired by traditional cuisine from the city of Lyon, located in east-central France, but also from the whole Lyonnaise region.
“What we have chosen is typical [of the] Lyon region. There are other famous Lyonnaise dishes, but some are made with specific meat from kidney, liver… We were not quite sure if people would be used to this type of meat, so we took the safest option and prepared dishes using ingredients that normally people like,” he said.
Elie Khalife stressed, however, that they have added the veal liver, as it is “a high-end product within the Lyonnaise cuisine.”
The products and ingredients to make such a menu were all imported from France, he added.
Back in France, Elie Khalife was one of chef Bertrand’s students at the Institute Paul Bocuse. Currently sous chef at MGM’s Aux Beaux Arts restaurant, Elie Khalife now has the opportunity to share the kitchen again with his former professor. “Seems like it was yesterday [that we worked together in France],” he recalled.
This time, however, is slightly different, as they have both joined forces to provide a Lyonnaise menu while working as professional chefs. It is no longer a teacher-student relationship, although Khalife recognizes that his professor’s experience is still much more extensive.
“It is different, because before he used to teach me; I was a student, I didn’t have much knowledge about cooking. I was just at the beginning [of my career]. Now we are both professionals, I can say. Of course he has much more experience than I have, but my knowledge and views about food are wider,” he said.
Elie Khalife stressed that his professor’s visit here is also an opportunity for his team to learn more about French cuisine. “I wanted to share the knowledge with the team, and allow them to [get to] know someone who can teach them,” he explained.
Chefs Bertrand Esnault and Elie Khalife will be preparing “Le Vrai Lyon” menu until Sunday. Aux Beaux Arts is open from 6:00 p.m. until 12 a.m. and the set menu price ranges from MOP438 to MOP488. 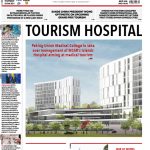