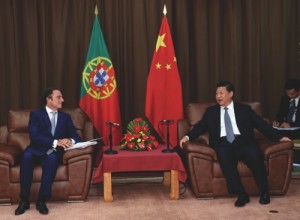 China has certified 31 Portuguese dairy product companies, which can now start exporting to the Chinese market, said the Portuguese deputy prime minister, Paulo Portas in Angra do Heroísmo after a meeting with Chinese President, Xi Jinping.
At the meeting on the island of Terceira, in the Azores archipelago, Portas and Xi Jinping discussed international and two-way topics, “with a particular focus on boosting our economic cooperation,” the Portuguese minister said.
Portas noted that last week China published, “the certification of 31 Portuguese companies which, from now on, will be able to export milk and dairy products to the Chinese market,” and added, “other negotiations in the agro-food sector are also going well.”
The Portuguese deputy prime minister noted growth in Portuguese exports to China, which rose “from 220 million euros in 209 to 660 million euros in 2013,” adding, “in the first quarter of this year growth was even more spectacular.”
According to Portuguese news agency Lusa, Portas also spoke to the Chinese president about the importance of establish a direct air link between China and Portugal, which could be “an enormous advantage for tourism ad business.”
Xi Jinping made a stop in Terceira of around eight hours on his way between Chile and China.  MDT/Macauhub