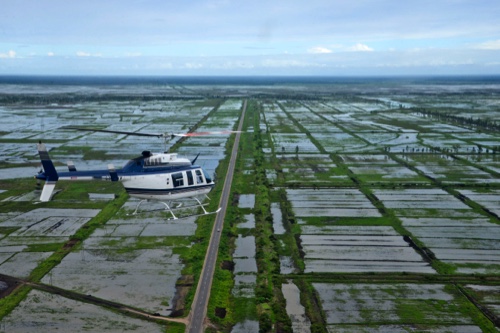 An helicopter flies over inundated fields in Mozambique

China has donated 10 tons of rice to victims of the floods that affected the provinces of central and northern Mozambique, the Deputy Director General of the National Institute of Disaster Management (INGC) said in Mozambique.
The donation, provided symbolically last week in Maputo, was provided by the China-Mozambique Chamber of Commerce, and was attended by the organization’s president, Ma Shuiyu, and economic attaché of the Chinese embassy in Mozambique, Wang Lipei.
At the same time, Mozambique’s flagship airline LAM provided cargo capacity of two tons of donations to the flood victims on all flights between Maputo and Quelimane, the capital of Zambezia province, which was most affected by the floods.
The Ministry of State Administration and Civil Service reported that until last Tuesday the floods had left 117 dead, including 93 in Zambezia, had affected about 150,000 people and destroyed 19,000 homes in central and northern Mozambique. MDT/Macauhub