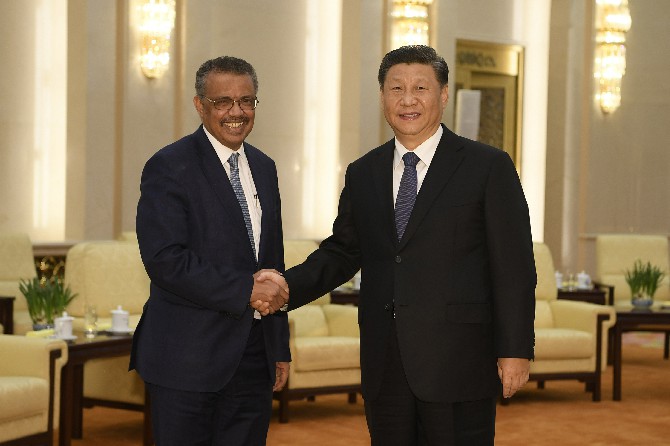 Tedros Adhanom Ghebreyesus, director general of the World Health Organization, shakes hands with President Xi Jinping before a meeting at the Great Hall of the People in Beijing (January 28, 2021)

China today (Wednesday) defended sticking to its strict “zero-COVID” approach, calling critical remarks from the head of the World Health Organization “irresponsible.”
The response from the Foreign Ministry came after WHO Director-General Tedros Adhanom Ghebreyesus said he had been discussing with Chinese experts the need for a different approach in light of new knowledge about the virus.
“When we talk about the ‘zero-COVID,’ we don’t think that it’s sustainable, considering the behavior of the virus now and what we anticipate in the future,” Tedros said.
Ministry spokesperson Zhao Lijian said at a daily briefing Wednesday, “We hope that relevant people can view China’s policy of epidemic prevention and control objectively and rationally, get more knowledge about the facts and refrain from making irresponsible remarks.”
“The Chinese government’s policy of epidemic prevention and control can stand the test of history, and our prevention and control measures are scientific and effective,” Zhao said. “China is one of the most successful countries in epidemic prevention and control in the world, which is obvious to all of the international community.”
Earlier Wednesday, deputy director of Shanghai’s Center for Disease Control Wu Huanyu reaffirmed the approach’s importance in eliminating a waning outbreak. He told reporters that while progress has been made, relaxing prevention and control measures could allow the virus to rebound.
“At the same time, now is also the most difficult and critical moment for our city to achieve zero-COVID,” Wu said at a daily briefing.
Wu gave no indication he was aware of the comments by Tedros.
Tedros was joined by Mike Ryan, the WHO’s emergencies chief, who said all pandemic control actions should “show due respect to individual and human rights.”
Countries need to “balance the control measures, the impact on society, the impact on the economy. That is not always an easy calibration to make,” Ryan said.
The incident marked a rare public show of friction between China and the WHO, which has been accused of succumbing to Chinese pressure to avoid criticism and awkward questions about the origins of the virus that was first detected in the central Chinese city of Wuhan in late 2019.
China’s ruling Communist Party has strictly controlled all discussion about its controversial approach, which aims to totally stamp out outbreaks, and said it would tolerate no criticism, questioning or distortion of the strategy. The entirely state-controlled media did not report on the comments by Tedros and Ryan and references to them on the Chinese internet appeared to have been removed by censors.
The ruthless and often chaotic implementation of zero-COVID has stirred considerable resentment in Shanghai, where some residents have been under lockdown for more than a month. As of Wednesday, more than 2 million people in the city remained confined to their residential compounds, while restrictions had been slightly relaxed for most of the other 23 million.
However, the easing appears to now be on hold, even as the number of new cases falls in the city that is home to China’s busiest port, main stock market and thousands of Chinese and foreign firms. People in some areas have been ordered to stay home again after having been let out for limited shopping in recent weeks. On Tuesday, service was suspended on the last two subway lines that were still operating.
Complaints have centered on shortages of food and other daily necessities and the forced removal of thousands of people to quarantine centers after having tested positive or having been in contact with an infected person, standard procedure in China’s zero-COVID approach.
Along with the human cost, the adherence to “zero-COVID” as many other countries loosen restrictions and try to live with the virus is exacting a growing economic toll.
However, the party under leader Xi Jinping shows no sign of backing off amid efforts to ensure stability and shore up its authority ahead of a major party congress this fall.
Chinese experts such as Wu have been careful to toe the party line, saying the strategy has been effective in limiting the official death toll in mainland China and that any let-up risks sparking a major new surge.
The daily number of new cases in Shanghai reported on Wednesday had fallen to less than 1,500, down from a peak of 26,000 in mid-April. Seven more COVID-19-related deaths were reported, raising the toll from the outbreak to 560.
While China says more than 88% of its population is fully vaccinated, the rate is considerably lower among the vulnerable elderly. Questions have also been raised about the efficacy of Chinese-produced vaccines compared to those from Europe and the United States.
In the capital Beijing, residents have been ordered to undergo mass testing in a bid to prevent a major outbreak like that in Shanghai. The city, which reported 37 new cases on Wednesday, has locked down individual buildings and residential compounds, shut about 60 subway stations and banned dining at restaurants, allowing only takeout and delivery.
The vast Forbidden City museum complex, the ancient home of China’s former emperors, will also be closing from Thursday to “reduce the danger of virus transmission in society posed by the circulation of people,” it said in a statement.
MDT/AP