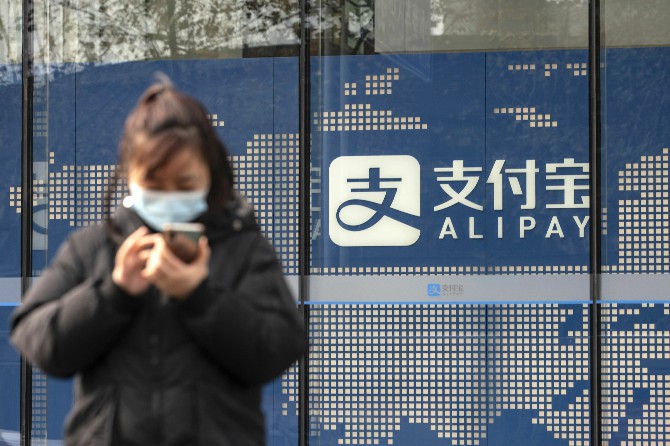 China proposed measures to curb market concentration in its online payment market, potentially dealing another blow to financial technology giant Ant Group Co. and its biggest rival Tencent Holdings Ltd.
The central bank said yesterday that any non-bank payment company with half of the market in online transactions or two entities with a combined two-thirds share could be subject to anti-trustprobes, according to draft rules released by the People’s Bank of China.
If a monopoly is confirmed, the central bank can suggest the cabinet impose restrictive measures including breaking up the entity by its business type. Firms already with payment licenses would have a one-year grace period to comply with the new rules, the PBOC said.
The rules present the strongest and most detailed message yet of regulators’ plans to curb monopolistic practices in the online payments industry. Ubiquitous in China, Ant and Tencent have transformed how consumers shop through their mobile apps that are used by a combined 1 billion people.
The regulator also vowed “comprehensive” oversight of companies in the space, and their transactions with affiliated parties. It will step up supervision of any changes to shareholders or beneficiaries at payments firms, it said.
“This shows there’s no let-up in regulatory tightening on the sprawling fintech businesses,” said Dong Ximiao, a researcher at Zhongguancun Internet Finance Institute.
Regulators shocked markets in November by suspending billionaire Jack Ma’s record initial public offering of Ant as they stepped up oversight. Ant has since been ordered to overhaul its business and an antitrust investigation was launched into affiliate Alibaba Group Holding Ltd.
While they’ve stopped short of directly asking for a breakup of Ant, the central bank has stressed that the company needs to “understand the necessity of overhauling” and come up with a timetable as soon as possible.
Ma emerged in public yesterday for the first time since China began clamping down on his businesses, ending several months of speculation over his whereabouts. Global investors are still seeking clarity on what the future holds for the world’s largest fintech firm.
Mobile payments are only part of what contribute to online transactions, but they have become the most important platform in China. Alipay, the app operated by Ant, held 55.6% of the mobile payments market as of the second quarter last year, according to internet consultant iResearch. Tencent had a 38.8% share.
Room for growth in online payments is limited after years of a head-to-head rivalry between Ant and Tencent’s Wechat Pay. Total transactions were 59.8 trillion yuan as of June 30, up 8.8% from a year earlier, according to iResearch. That’s sharply down from increases of 23% and 65% during the same period in 2019 and 2018, respectively. Bloomberg