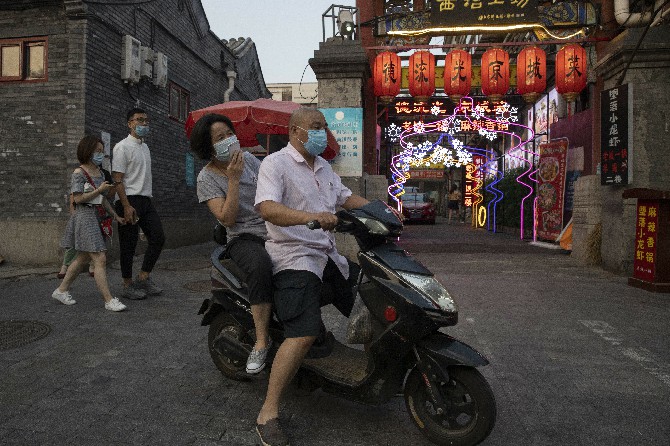 The Daronghe restaurant in Chengdu in China’s west has reopened but, with business down by half, its staff of 150 come to work on alternate days.
Three months after China declared victory over the coronavirus and started to reopen its economy, the restaurant is among thousands of small businesses that are struggling to lure back skittish consumers nervous about the virus and possible job losses.
“People still worry about eating out,” said an employee, Ming Yuan. “We are giving customers coupons in hopes they will come back.”
Official data show many Chinese industries, from auto manufacturing to e-commerce, are returning to pre-virus activity levels. But retailers, restaurants and other businesses that employ millions of people were hit especially hard. That raises questions about how fast the economy can generate new jobs for people who lost theirs in the pandemic.
“The Chinese economy is recovering, but very, very slowly,” said Iris Pang of ING.
China faces a bumpy road to recovery. Demand for exports is weak as infections rise in the United States, Brazil and other markets. Summer flooding set back the recovery in some southern areas.
Already soured by a tariff war, relations with Washington have worsened further over a security law imposed on Hong Kong.
The Trump administration has revoked some of Hong Kong’s trading privileges. That threatens to undercut its status as a major port.
The slow pace of China’s recovery is sobering for countries that are struggling to manage their own viral outbreaks.
In the United States, businesses in some states reopened in May. Employers added a surprise 2.5 million jobs that month. But that followed losses in March and April that have left roughly 30 million Americans unemployed.
Analysts expect U.S. data due out Thursday to show a gain of 3 million jobs in June. But more states are suspending or reversing reopening orders amid new viral outbreaks, suggesting hiring could slow or decline in July.
In China, Citigroup said Monday its measures of business activity indicate a “weakening in the recovery momentum of industrial production” as well as consumer demand and public movement.
Forecasters expect economic growth to resume as early as this quarter after industrial production returned to positive territory in May, when it grew 4.4% over a year earlier. That was boosted by higher government spending on building bridges and other public works, Beijing’s traditional strategy for pumping money quickly into the economy.
Estimates of this year’s economic growth range from the low single digits to a small contraction.
The government has promised to spend 2 trillion yuan ($280 billion) to create 9 million jobs. But Beijing, leery of adding to already high debt, avoided joining the United States, Japan and other major economies in announcing a $1 trillion-plus stimulus packages.
“That has a cost,” said Pang. “It means the Chinese economy will recover only very, very slowly.”
The job-creation target is only a fraction of losses.
Private sector analysts say as much as 30% of the urban workforce, or as many as 130 million people, lost their jobs at least temporarily during the shutdown. They say as many as 25 million jobs might be lost for good this year.
Some city governments have tried to draw customers back to vacant shopping malls by giving away discount coupons. That helped, but the scale of the giveaways was modest in a market of 1.3 billion potential consumers. Spending in restaurants still was off 19% in May from a year earlier. Retail sales contracted 2.8%.
That is a setback for the ruling Communist Party’s long-term goal of reducing reliance on exports and investment by nurturing self-sustaining growth based on consumer spending and service industries that generate jobs with less capital spending.
The ruling party appealed to companies to avoid layoffs during the two months that most business and travel were shut down. Entrepreneurs were promised tax breaks and loans. Premier Li Keqiang said in May the government wants to encourage consumers to spend by making sure 70% of its stimulus is channeled into wages.
But the scale of the aid is limited and the official Xinhua News Agency has acknowledged it has been hampered by red tape and the reluctance of state-owned banks to deal with struggling private businesses they see as a bad risk.
Wu Dani, who owns a snack shop in the eastern city of Jinan, said her revenue is down 90% from before the outbreak. From a workforce of 10, only she and one employee remain.
“We never benefited from government policies. It’s just empty talk,” Wu said. “If the government announced new policies to support businesses during the coronavirus outbreak, it would only benefit my landlord.”
A virus outbreak in Beijing last month sparked fears of a second wave of infections. Authorities imposed travel controls on the capital and ordered testing of thousands of residents. But other local outbreaks have been contained relatively quickly, limiting their impact.
Manufacturing activity improved in June but export demand was weak, according to a survey released Tuesday by the national statistics agency and an industry group, the China Federation of Logistics & Purchasing.
The monthly purchasing managers’ index rose to 50.9 from May’s 50.6 on a 100-point scale on which numbers above 50 show activity expanding. Its employment sub-index sank to 49.1 from May’s 50.2, indicating employers were cutting jobs.
“The external environment is very severe,” the Federation said in a statement. It said production is “still significantly higher” than demand.
Business “hasn’t turned around yet,” said the owner of a clothing factory with 20 employees in the western city of Xi’an.
The owner, who refused to give her name, said she used to make 100,000 yuan ($16,000) a year but has lost tens of thousands of yuan this year.
“I am almost on the verge of closing the factory,” she said. JOE McDONALD, Beijing, AP